Skip to content
Home / Delve into the Depths in the Kobold Blog / Monday Monsters: Reapervast and Gearlings 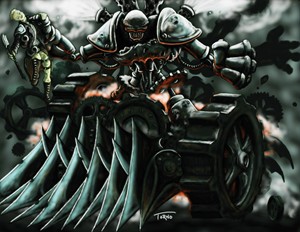 Steel grates on steel as a steady hissing steam clouds your vision. Through the haze you see a gigantic mechanical beast surge forward.

The reapervast is the ultimate invention of Beret Tinglefoot, but alas, the gnome’s ambition outstripped his skill. While Tinglefoot learned to graft souls into clockwork machinery, the inventor did not realize the intelligence inherent in the spark of life. When dealing with lesser machines and singular souls, this was hardly a problem. The life force acted as he had planned, purely a motive force for his constructions. But this motive force slowly gained awareness.

It started simply enough. One gear alone is nothing; however, when combined with belts, other gears and firing pistons, it fulfills its purpose and acts. Tinglefoot’s sentient harvest engines had little trouble joining their similar gears and materials into something greater. They simply rearranged those parts in the most efficient manner between two engines. Then three. Then four.

If the machines had merged only mechanical pieces, Tinglefoot might have diffused the situation. But his metal machines operated on necromantic principles and consumed the fuel of human souls. Each merging joined not only more mass, but also more lives, more magic, and an increasing sentience.

Tinglefoot was lucky to escape with his life. His workshop is no longer his; instead the reapervast — as the sentient machine prefers to be called — treats the tinker’s home as an extension of its body. Here it sits, cold and efficient, sending out its engines to collect more and more souls, so that it may continue to do what it knows best — build.

Reapervast Tactics
The reapervast seeks to build more clockwork minions, using Clockwork Assimilate as often as possible. In an ideal situation it would keep the energies it draws to put into creating more harvester engines, but in battle it turns that stored life force into Gear-driven Smash.

Its remaining combat options keep foes at bay: it employs Grasping Gears whenever it is recharged, and Violent Machinery to remove foes circling the reapervast.

Machinery tumbles off the reapervast with every blow it suffers. These gears, springs, and sprockets attach to whatever is at hand — even each other — and lurch to life.
Reaper’s Gearling         Level 16 Soldier Minion
Medium Natural Animate (construct)         XP 350

Reaper’s Gearling Tactics
A reaper gearling an extension of the reapervast. It constantly charges the battlefield using Motive Force to propel enemies away from its creator.

Battle Against the Reapervast
Fighting an epic beast like the reapervast is likely the culmination of a fair-sized story arc. The battle should be exciting, terse, and, more than anything else, unusual.

The reapervast is not your standard monster. It’s an agglomeration of gears, metal, and the souls of children. The former two qualities grant it a strength and presence in battle that befits its powers; the latter is best played up as a role-playing hook. Throughout the battle children’s faces may press outward from the monster’s metal and clockwork exterior. The hiss and grind of its steam-driven motion may at times sound like the laughter, crying, or screams of children.

Clockwork creep is more an assimilation than a disease; unfortunate victims of this malady find their flesh and muscle being replaced by clockwork automations and their will being supplanted by a feverish loyalty to the reapervast.
Attack: +18 vs Fortitude
Endurance: improve DC 24, maintain DC 19, worsen DC 18 or lower.

Check back tomorrow for expanded adventure options with the Reapervast! This the second installment of a series of articles by Nevermet Press. Give it a thumbs up or down in comments.