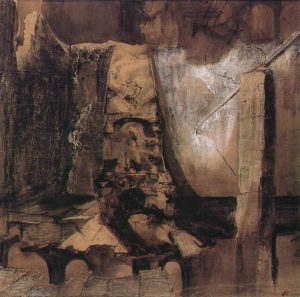 In the center of a great saltwater sea floats an island necropolis: a city of twisting catacombs, looming mausoleums, and sprawling graveyards rivaling in size the capitol city of the empire itself. It is from this nether citadel that the arch-lich lays his schemes, forever plotting to overrun the shores of civilization with his hordes of ravenous dead.

Though the arch-lich commands vast legions with which to launch campaigns, the spearhead of his assaults are, without exception, the lich-touched siege kraken monumentbringers, undead engines of destruction that shamble from the water to lay waste to coastal settlements. The spiderlike creeping advance of these monstrosities is inexorable, their march leaving behind only blighted monoliths ringed with slime-choked ruins and shattered skeletons.

A gargantuan undead kraken lumbers upright on six tall legs, its pallid skin shimmering with paralytic ooze. Statues and obelisks jut from its back like spines, each one bearing necromantic sigils that leave trails of sickly green smoke.

Natural even miss: 30 damage, and one nearby small structure or similar piece of terrain crumbles.

Natural 16+: The siege kraken may make a congealed ink and flotsam blast attack as a free action.

[Special Trigger] C: Congealed ink and flotsam blast +11 vs. PD (1d3 nearby enemies) – 40 acid and negative energy damage, and 1d4 zombie pirates (see below) rise from the ink and flotsam. They act immediately.

Plant monument +11 vs. PD – 80 negative energy damage, and the target is stuck (save ends). In addition, the siege kraken plants a statue or obelisk into the ground next to the target (or on top of the target in the case of a hit). Until the end of the battle, enemies that can see the monument take a penalty to defenses equal to the escalation die. In addition, the monument has one of the following effects (determined randomly) for as long as it stands, plus one cycle of the moon:

2. Unburied dead within 66 miles glow with dim corpse light. Each whispers the same secret to those nearby.

3. Buried dead within 66 miles have their most prized possession in life teleported to the hollow within their chest.

4. Monuments to the arch-lich burst from the ground in the center of every village or city within 66 miles.

Limited use: 1/battle, as a quick action.

Siege engine: As part of its movement, the siege kraken can step on, step over, or crash through low walls, short buildings, or similar terrain.

When the lich-touched siege kraken monumentbringer is slain, the PCs may claim the following rewards in addition to any treasure they would normally earn:

Sersa Victory is the founder of SVD Press, a small group that publishes deathtrap dungeons for D&D, Dungeon World, and 13th Age. Among other titles and curses, Sersa was named Apprentice of Acererak by Chris Perkins and Monarch of the Monsters by Kobold Press readers. His adventures, including Revenge of the Iron Lich and Fane of the Heresiarch, laid the foundation for the genre that would be known as fourthcore.