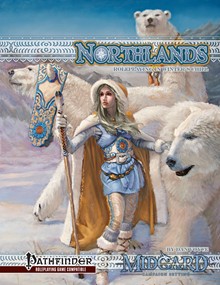 All through the winter they’ve been sharpening their axes and readying their spells: Donneren barbarians, Skraeling rangers, Kazzakh horsemen, reaver dwarves and Hyperborean sorcerers. Impatient for battle, and a chance to win treasure and glory; to join the ranks of heroes whose deeds are sung by skalds in the mead-halls.

Now the waiting has ended: Northlands: Roleplaying in Winter’s Chill, the Midgard Campaign Setting sourcebook for adventuring at the End of the World, is available in the Kobold Store!

Lead designer Dan Voyce and the Northlands patrons have opened up new and dazzling vistas for role-playing in the frozen north. The book begins with a concise but detailed overview of northern life, society, morality, religion, traditions and law. The major gods and their demands on mortals are described, as well as dueling, hospitality, outlawry, slavery, and relations between the various humanoid races.

The Northlands themselves provide an amazingly diverse setting for adventures. To list just a few examples: characters can form Viking bands and raid the coasts; explore the magic-rich realm of the giants; enter savage kingdoms ruled by bears and wolves; or journey to the top of the world itself to retrieve the shoggoth-guarded flotsam and jetsam of alien shores.

There are new northern character races, classes, variants, and sorcerous bloodlines. Feats such as Name-Bearer, Thousand Yard Stare and Shieldbreaker, and traits like Born for the Longship, Raised by Monsters and Hard Drinker, will provide characters with distinctive flavor. Readers will also find pages of new weapons, armor, equipment, and treasure. 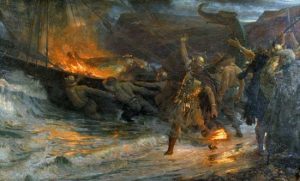 And magic! The magic of the North is wild and savage, and its power often requires a price. Characters can master grudge magic and rune magic, learn incantations and spells such as Curse of the Wild Moon, Loki’s Gift and Rain of Blades, and wield new and powerful magic items. Which will come in handy against Northlands’ new hazards (including the coil of the World Serpent itself), and new monsters such as the ice maiden, nightgarm, and the vengeful undead draugr.

We’re just skimming the surface of everything that’s packed into this mighty 114-page sourcebook. So head over to the Kobold Store and grab your copy of Northlands in print or PDF today!

11 thoughts on “Northlands Sourcebook for Pathfinder Is Here”