Skip to content
Home / Delve into the Depths in the Kobold Blog / My First Gen Con: Erik Mona 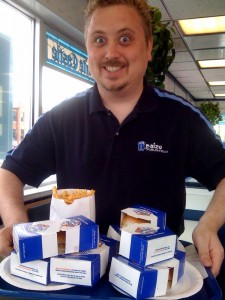 Thanks to all of you who shared your Gen Con stories—we’re reviewing the entries now and will announce the contest winner on July 30th!

Now, Erik Mona shares his memories of meeting the Gods of Gen Con…

In May of 1995, a year from graduating college and back home in Minnesota for summer, I was desperate for a game. Most of my old D&D buddies had moved on or moved away, and I decided that the only way I would ever game that summer involved getting more use out of my RPGA membership than simply reading Polyhedron Newszine. I decided to go to a convention. My very first convention: Twin Con, in Bloomington, Minnesota. There I met up with a rag-tag band of scoundrels involved in the RPGA’s Living City campaign, and realized that convention gaming—while not quite as exciting as “real” gaming at home—held an awful lot of promise.

I left the show with a Gen Con preregistration form…

I managed to convince three of my buddies to join me for the August trek out to Milwaukee. A couple of them seemed more interested in this new Magic: The Gathering game than our beloved D&D, but since we were poor college kids splitting a single hotel room, I didn’t care so much about the motivation of my peers as much as their power to lower the per-night room rate. So we piled into a car and set out.

Back then, TSR held Gen Con in the MECCA convention center in downtown Milwaukee, and given all of the gamers making a pilgrimage to the site, the name seemed appropriate. I got into several Living City games, got my ass spanked at a Warhammer 40,000 tournament, and re-connected with some RPGA friends I’d made at Twin Con.

But for all of the gaming goodness, my favorite part of the convention was the seminars. I got to meet TSR AOL coordinator Sean K. Reynolds at a contentious seminar about TSR’s ridiculous fan website policy. I sat in on a Planescape demo with Monte Cook and Michele Carter in the giant TSR castle, and since my first love was the World of Greyhawk, I was thrilled to listen to Roger Moore and others discuss their hopes for reinvigorating the setting.

In the years since then I’ve had a chance to game with, collaborate with, or employ all of those mega-stars at one time or another, and consider all of them personal friends. But back then, I was just a fan boy recognizing TSR superstars from their photos in Dragon magazine.

One memory sticks with me all these years later. After a fierce day of gaming and seminars, I walked over to the local mall food court to indulge in some delightful Rocky Roccoco pizza. All of my friends were engaged in their own events, so I dined alone. As I scanned the busy tables, my eyes fell upon a bespectacled fellow seated a few tables away, looking over a book or magazine while enjoying his lunch. My stomach lurched as I recognized him as none other than legendary game designer WOLFGANG BAUR! I couldn’t believe that I was sitting only a few feet from one of the game writers I most respected, and I marveled that only Gen Con could bring me so close to my gaming idols.

I didn’t have the guts to walk up and say hi, but for some reason that Milwaukee food court near-encounter has always stuck in my memory as one of the highlights of the show. I eventually did get to meet Wolf, of course, and these days we work together so frequently that it’s almost funny to think about how excited I was just to be sitting near the guy. Little did I know that 15 years later, he’d ask me to write an anecdote about my favorite first Gen Con memories.

Well, Wolfgang, one of my favorite Gen Con memories was watching you eat lunch at the food court. Only Gen Con could make the gods manifest in such a manner.

Let’s try to do lunch at this year’s show, eh?

Wolfgang’s response: Classic convention story; and hey, that moment of “OMG I’m standing next to Someone Cool!” still hits me more often than I care to admit.  Erik, if we manage to eat lunch at Gen Con 2010, the pizza is on me.

Erik Mona is the publisher of Paizo Publishing, LLC, creators of the Pathfinder Roleplaying Game and the Planet Stories line of pulp fantasy novels. He’s won more than a dozen major game industry awards and his writing has been published by Paizo, Wizards of the Coast, Green Ronin Publishing, and The MIT Press.