Skip to content
Home / Delve into the Depths in the Kobold Blog / Monsters of the Greek Heroic Age: Phoenix 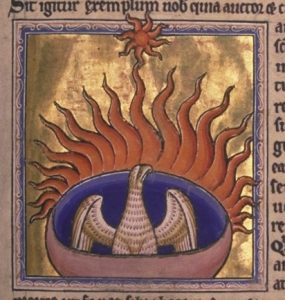 The phoenix awaits you beyond the jump.

The phoenix is a beautiful, eagle-like bird with wings of red and gold. Although it looks like a bird of prey, the phoenix actually eats frankincense and other odoriferous gums from trees.

There is debate about whether the phoenix is immortal or merely very long lived, but every 500 years or so at the end of its life cycle, the phoenix gathers a nest of cinnamon, spikenard, and myrrh to act as its funeral pyre. As it gets ready to die, the phoenix turns toward the sun and uses its reflective wings to concentrate the sun’s light on the pyre. As the pyre ignites, the phoenix flaps its wings to intensify the conflagration and then lies down to die.

The phoenix then is reborn from the ashes of its father and, once it has regained its strength, it carries the nest and ashes to the city of Helipolis in Egypt and lays the remains to rest in the temple of the Sun.

Although the phoenix is not aggressive, it has been sought out by fortune seekers and treasure hunters who desire the phoenix’s feathers, which are rumored to have mystical and magical properties.

Sunbeam: By concentrating the sun’s light with its golden feathers, the phoenix can use Sunbeam as a ranged attack with a short range of 12 yards and a long range of 24 yards.

Blinding Light: The phoenix can try to blind its target as a 3 SP stunt when attacking with Sunbeam. Unless the target succeeds on a Dexterity (Initiative) test vs. the phoenix’s Magic, the target is blinded for 1d3 rounds. While blinded, the target has a –2 penalty to all attacks and a –2 penalty to defense.

Metallic Feathers: The metallic feathers covering the phoenix provide it with an Armor Rating of 4.