Skip to content
Home / Delve into the Depths in the Kobold Blog / Cult Activity: Cabalists and Heralds 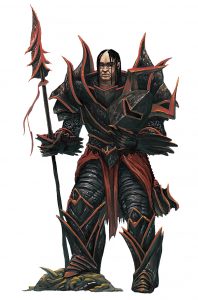 The core rules provide options for cultists and cult leaders but few options for other members of an occult organization. In particular, those who have sworn pacts to gain magical power are sorely underrepresented.

This article presents two new NPCs to help develop and fill out the membership and leadership of a profane sect. Cabalists are the newest recruits in a cult, inexperienced and disposable. Heralds are an organization’s active recruiters, working with higher-ranking cult members to keep the group’s ranks filled.

The entries are presented in the same monster format as other entries in the SRD.

Note, the NPCs below both list the creature’s race as humanoid, but often the most compelling stories come when you deviate from the rules. Imagine the power a cult might wield if its herald was a harpy, using its luring song to draw in recruits. Imagine the surprise members would feel if a medusa, fresh from a pact with a powerful fey lord, supplicates itself to the cult leadership in its quest to gain power or pursue revenge.

Medium Humanoid (any race), any alignment

Spellcasting. The cabalist is a 1st-level spellcaster. Its spellcasting ability is Charisma (spell save DC 12, +4 to hit with spell attacks). It has two 1st-level spell slots, which it regains after finishing a short or long rest, and knows the following warlock spells:

Cabalists are the newest recruits to a cult, and have just begun to taste the power of their patron. They perform various ceremonial duties for higher-ranking members, but also run the risk of being sacrificed by those they support.

Devil’s Sight: The herald can see normally in darkness, both magical and nonmagical, to a distance of 120 feet.

Mask of Many Faces: The herald can cast disguise self at will, without expending a spell slot.

Spellcasting. The herald is a 4th-level spellcaster. Its spellcasting ability is Charisma (spell save DC 13, +5 to hit with spell attacks). It has two 2nd-level spell slots, which it regains after finishing a short or long rest, and knows the following warlock spells:

Heralds are typically part of a cult’s leadership and recruiting arm. Their highest priority is to bring in new members, often preying on the insecure and unwary. They generally try to keep their true identities secret so they can move throughout society unknown.