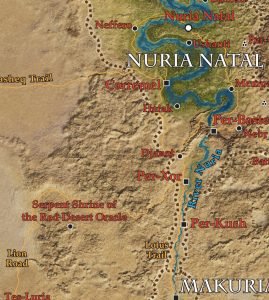 Whether your campaign is in Midgard or another setting, the allure of ancient locales in distant lands is a draw for any adventurer. That fascination is captured by Kobold Press’s upcoming hardcover, the Southlands Campaign Setting. Within its pages you will find lands of mystery and adventure, where riches and dangers await. Its deserts are rife with forgotten tombs, swift sand skiffs, and nomadic spirit talkers. The tall grass of the savannahs hides lost cities and fierce warriors, and the dense jungles swarm with living vines that choke the life from careless visitors. Though written to illuminate Midgard’s largest continent, the material can easily be used for any setting. So if you are brave enough to set forth into burning sands, fierce jungles, wild coasts, and ancient cities, you may find riches beyond imagining. Be warned, however, because only death awaits most explorers.

But how, you might ask, do you get there?

Well, my friends, the adventure is in the journey. Travel into the Southlands begins in the mighty empire of the God-Kings, and their glittering capital, Nuria Natal. Eager merchants from the Seven Cities cruise up the wide, deep River Nuria, bringing their finest wares. From that city of rich bazaars and potent magic, long trains of camels and flotillas of sandships ply the dunes, crossing the desert wastes to bring back riches. The Lion Road and the Lotus Trail, two caravan routes highlighted in the Southlands Campaign Setting, are the major overland paths to the lands of salt and gold.

The Lion Road begins in Corremel. It brings raw goods, such as rod stock or lumber, approximately 500 miles to the temples of Per-Xor. Then, it winds southwest for 900 miles, to the Narumbeki Gap on the edge of Kush. This is a dangerous path, for the creatures of Kush frequently raid the valley of the Gap. The Lion Road uses the Pyramid of Khensu as an important landmark; no caravan stops near the cursed structure, believing the area haunted by hungering undead. Expeditions returning from the Lion Road bring back dwarvish metalwork, exotic hides, and, occasionally, strange texts written on a bark-like paper from Lignas.

Following the River Nuria from Per-Bastet for 900 miles, the Lotus Trail is the shortest of the regular trade routes, but by no means is it an easy journey. Caravans either pull barges against the current, sail upstream, or use the winds to drive for the Black Lotus Plateau. The plateau’s magical runoff becomes stronger and more unpredictable the closer one approaches the mesa; this often results in hallucinations, and it sometimes produces phantasms and strange creatures that are hungry for human or camel flesh. This trip often requires 35 days on foot, or 20 days by sandship. Neither option can avoid the effects of the river’s enchantments. Caravans bring small livestock, manufactured goods, and raw metals to the edge of the plateau, where merchants arrive from Aerdvall to trade in incense, lotus products, and rarified waters from Aerdvall’s sky-wells.

These are not the only paths, of course. Merchants from Ishadia speak of the tower-packed cities of Mhalmet and Mosylon, mingling with the trade factors in great, marble-paved markets flush with rare luxuries, peppercorns, and gold. A caravan route from Mhalmet plunges deep into the Sarklan desert, where sandships seek out the oasis of Siwal before continuing to Nuria Natal. Those more interested in a game of exploration might continue to push south from Mosylon’s harbor, seeking out jungle zinjs or the steamy waters of the Corsair Coast.

And so, characters hailing from more commonly experienced campaign settings could easily find passage into the exotic realms of the Southlands, regardless of their world, following tales of desert ruins, of lost cities rising out of the wilderness of the interior, and of the strange sights and races we’ll be considering for our next previews!

The map used in this article gives you an idea of the geography around the two caravan routes noted above.