Skip to content
Home / Delve into the Depths in the Kobold Blog / Monster Monday: Psyclone 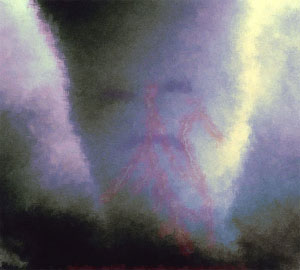 When a catastrophe strikes or a massacre takes place, and the lives of thousands are extinguished, some might come to believe that the place where it happened is accursed and that the very stones remember the agony of the dying. In fact, when the victims are psionic beings, their mental death shrieks and psychic horror might survive the annihilation, leaving behind a whirling maelstrom of malice and vengeance. Scholars of creatures have taken to calling such an entity a psyclone.

Dungeoneering DC 21: Haunting the crumbling, lifeless husks of cities once occupied by abhorrent psionic creatures or lurking near the devastated ruins of outposts once claimed by the hunters of the aforementioned creatures, the purple-tinted black vortex of a psyclone is all that remains of the dead who once dwelt there. Psyclones are not ghosts of the departed, or for that matter, any other kind of undead haunt. Instead, they are an aberrant abomination born from the psychic scream of hundreds (and even thousands) of psionically aware beings, all horribly killed in one momentous event.

These malefic aberrations are made up of psychic energy and the debris of the ruins around them. They do not rest or sleep, and they have no need for food or treasure. Psyclones desire only to bestow agony, terror, and death upon any creature that crosses its path. The fragments of faces and eyes of the long dead that sometimes peer from the psyclone’s whirling form show only horror, hatred, and malice. It knows no mercy, and it cannot be persuaded or influenced—only fled from or destroyed.

A psyclone has no social awareness, being fixated only on the vague recollections of the horrible cataclysm that created it. Therefore, it does not ally itself with other creatures, nor can other monsters control it. On some rare occasions, however, monsters in the area near a ruin where a psyclone lurks use the psychic abomination to their advantage. They lurk nearby and prey upon wounded creatures fleeing a psyclone—or they might lure very dangerous enemies into the psyclone’s domain to save themselves.

Immune disease, poison, Resist 10 psychic, Vulnerable 10 variable (based on the damage type that created the psyclone; see below)

While squeezing, the psyclone moves at full speed rather than half speed, it doesn’t take the –5 penalty to attack rolls, and it doesn’t grant combat advantage for squeezing.

The psyclone cannot be stunned, and any attack that would normally cause a stun effect causes the target to become dazed instead.

Hit: 3d6 + 9 psychic damage, and the psyclone pushes the target up to 2 squares.

Attack: Melee 2 (one or two Medium or smaller creatures); +15 vs. Reflex

Hit: The target is grabbed and pulled into the psyclone’s space. The target is dominated and takes ongoing 10 psychic damage until the grab ends (escape DC 20). A creature that escapes the grab shifts to a square of its choosing adjacent to the psyclone. The psyclone can move normally while creatures are grabbed, and it can have up to two creatures grabbed at a time.

Trigger: The psyclone is first bloodied.

Effect (Free Action): The psyclone’s horrific remembrances power recharges, and it uses it.

Psyclones are dreadful in combat, forcing enemies to share in the horror and pain that created them by blasting out its horrific remembrances. It absorbs and then dominates some of its enemies in its mental maelstrom, causing these victims to murder their allies while they die within its psychic grasp.

If a psyclone’s enemies can divine the circumstances around which it was created, then they can exploit its vulnerability. For instance, a psyclone formed after a volcanic blast wiped out several creatures can be taken down by fiery attacks, which force it to revisit the memories of victims who died in the cataclysm that gave it life. But each psyclone is formed from different circumstances, and heroes need to think quickly if they wish to use the abomination’s birth pains against itself.

Psyclones resemble a whirlwind of dark purple cloud wisps, in which hundreds of fragments of distorted and shrieking faces whip around within the storm. Arcs and flashes of red-tinged lightning crackle periodically within the aberration’s body as it hovers across the ground.

Acknowledgements: This creature was (vaguely) inspired by Psyclone, a novel by Greg Bear published in 1979.