Skip to content
Home / Delve into the Depths in the Kobold Blog / Monster Monday: Ollobraxis 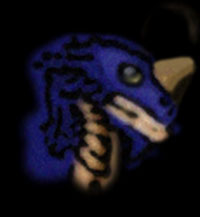 The scales of the long, sleek dragon before you shine like a clear autumn sky, but his eyes glower with the midnight depth of the ages.

BACKGROUND
Over three hundred years ago, a forgotten tribe of dust goblins plucked a precious treasure from the devastation wrought by the Great Old One Anax Apogeion—the perfect silver-and-blue-speckled egg of a blue dragon. Freed from an enchantment that prevented its maturation, the egg hatched a fortnight later, loosing the blue dragon Ollobraxis upon the Wastes. The harsh environment produced a crafty predator—a master of manipulation and misdirection—who learned the value of cultivating a vast web of servants to ensure his survival and eventually further his plans. Today, Ollobraxis secretly lairs in exquisite chambers crafted in the caves beneath Caerth Watch, one of the Nine Towers of Verrayne.

TACTICS
Before Combat Ollobraxis does not engage in direct conflict unless his measures to avoid detection and manipulate foes fail. He uses negotiation, threats, and spells such as charm person and hypnotism in an attempt to avoid combat.
During Combat Ollobraxis casts haste and attempts to slay the weakest foe he faces with his breath weapon and direct attacks. Then he renews attempts to bargain with remaining foes if they agree to serve him.
Morale If reduced to half his hit points or fewer, Ollobraxis attempts to barter for his life and freedom, though he pushes to set up an arrangement favorable to his goals. If this fails, he seeks to flee the field of battle.

MOTIVATIONS AND GOALS
Ollobraxis is a puppet master operating under the very noses of the Order of Seekers and the Oaken Ring. The dragon was originally drawn into his exploitation of Verrayne to blunt the Oaken Ring’s attempts to restore the Wastes. Understanding direct violence would likely bring reprisals beyond his control, Ollobraxis set out to destabilize the Duchy from within, ensuring a status quo and leaving the dragon free to continue his pursuits in the Wastes. For years, Ollobraxis has successfully avoided detection by the powerful forces within Verrayne, playing them against one another and turning the politics of the Duchy to his advantage. The dragon’s greatest success to-date involved engineering the death of the former duke of Verrayne. While the current duke is not one of his minions, Green Duke Valis enacts many policies furthering the dragon’s schemes, including agreements with “civilized” goblin tribes providing a pipeline for the treasures his servants unearth in the Wastes. Ollobraxis has cultivated allies within the arcane defenders of the Nine Towers, the Order of Seekers, and even the Black Band. But, his audacious plots may eventually catch up with him. Ollobraxis toys with dangerous foes and he may eventually be outdone by more clever adversaries. Every success emboldens him to riskier gambits and Blood Mother Margase begins to wonder if there might be something besides the Oaken Ring masterminding events in Verrayne.

SCHEMES AND PLOTS
Most adventurers are unlikely to face Ollobraxis directly, but they may get caught in his schemes easily. Ollobraxis is particularly fond of beguiling good creatures or adventurers into his service. In the Wastes, the dragon seeks to uncover lost magic and artifacts from the ruins. Explorers may run afoul of his goblin servitors or become drawn into recovering treasures on his behalf. Scouts and defenders of Verrayne may face violent tribes, such as the Bloody Tusks, that he uses to maintain a constant threat of wildness and danger against the Green Duchy. In Verrayne, Ollobraxis sends his servants to sell his prizes and continues to conspire against the Oaken Ring. Adventurers might be hired by the Seekers for detective work tracking down the source of smuggled treasures from the Wastes. Do-gooders might be manipulated into opposition of the more extreme elements of the Oaken Ring when a “concerned” agent contacts them with information.