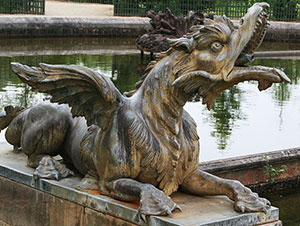 Da’ling left his mother’s lair at the age of nine, taking with him only a hat of disguise, which he had secretly “borrowed” from his mother’s hoard. He arrived in the coastal city of Barsella and used the hat of disguise to appear as a kobold. Once among the kobolds, he used his silver tongue to talk his way into the banking world. Known about the city as “Little Brass,” Da’ling saved up his money and purchased a belt of dwarvenkind. Now he acts as the middleman between the small but rich community of dwarf artisans and merchants of Barsella and the rest of the city. Five years after his arrival, he has a larger hoard than some dragons ten times his age. All dwarves, as well as those wishing to buy dwarven goods in bulk, go through Little Brass for the best deals and professional service.

With his success, Da’ling has found he has need of adventurers; he prefers skilled and trustworthy guards mainly, but he also wants liaisons who can work with noble houses, ship captains, and thieves’ guilds. Recently, Da’ling discovered that a small group of evil dragons has learned of him and his riches. Now he fears for his own life and the life of his mother. He has made inquiries into hiring elite bodyguards for his mother in her lair and for him in Barsella. He has also spread word rewarding any who can bring an agent of his information regarding these other dragons—the request is carefully worded and set up to avoid Da’ling’s involvement in the matter.

Da’ling can often be found at the Agoman Bank, where he sleeps in a safe on a bed of bank notes.

Sleep Breath (DC 19) (Su) Instead of a line of fire, a brass dragon can breathe a cone of sleep gas. Creatures within the cone must succeed on a Will save or fall asleep for 1d6+2 rounds.

Stonecunning +2 (belt of dwarvenkind) +2 racial bonus to Perception checks to notice unusual stonework, such as traps and hidden doors located in stone walls or floors. Da’ling receives a check to notice such things when he passes within 10 ft., even if he is not actively looking.

To jump in on the Midgard fun, you can take a look at the Midgard Campaign Setting, which is available for pre-order in softcover and hardcover.