Skip to content
Home / Delve into the Depths in the Kobold Blog / Monster Mayhem: Ghostly Powers 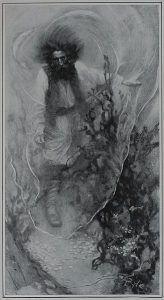 Fearsome creatures caught between life and death, trapped in that twilight hour by their own hand or by an unceasing desire for retribution against those who wronged them, ghosts are a classic staple of many horror and fantasy campaigns. Beyond their terrifying wails and incorporeality, many ghosts can hold more than a few surprises for PCs up their translucent sleeves.

The ghost template offers GMs a handful of choices in customizing an undead foe for their players but few surprises for a group of experienced players. When creating a ghost for your game, try replacing one or more of its special attacks with an environment-focused one. Unless noted, a ghost’s special attack saving throw DC is equal to 10 +1/2 the ghost’s HD + Charisma modifier.

Breath Weapon (Su): Noxious fumes overtook this ghost in life, and they have stayed with it even in death. As a standard action, the ghost can breathe a cone of toxic gas half the ghost’s space in width and three times its space in length. Creatures in this area must make a Fortitude saving throw or become nauseated for 1 round, after which they are sickened for a number of rounds equal to the ghost’s Charisma modifier (minimum 1).

Chains of Avarice (Su): The pursuit of wealth led to this ghost’s first death, and it seeks to have others join its fate. As a standard action, the ghost can command translucent chains to surround and grip a single target. If the target is carrying any coins or gems, the target suffers the effects of slow (as the spell, Will save to resist) for a number of rounds equal to the ghost’s HD.

Desiccating Aura (Su): Surrounded by a halo of rippling heat, this ghost radiates an aura of enervating energy, draining the vitality of its victims. The aura varies in size depending on the ghost, equal to twice its reach. For every round that a creature remains in the ghost’s aura, it must make a Fortitude save or become exhausted. A creature already affected by a ghost’s desiccating aura cannot be affected again for 24 hours.

Despoiling Touch (Su): This ability causes vegetation to rot, food to spoil, and liquid to become undrinkable. As a standard action, the ghost can cause an area equal to the space it occupies to wither away, the plant life destroyed, or it can choose to target a creature. If the ghost targets a creature, it instead affects all of that creature’s belongings. Magic items such as potions, elixirs, salves, and ointments are particularly vulnerable to a ghost’s despoiling touch, but they are allowed a Fortitude saving throw to negate the effect. Plant creatures who fail a Fortitude saving throw are stunned for a number of rounds equal to the ghost’s Charisma modifier (minimum 1).

Dissonance (Su): Summoning all of its fury and sadness, the ghost lets out a soul-chilling sound filled with weeping and cries of anger. Creatures within a 30-ft. radius become disoriented as their hearing and vision blurs. All forms of sensory perception are disrupted for a number of rounds equal to the ghost’s Charisma modifier (minimum 1), making the targets blinded and deafened. This is a sonic, mind-affecting effect.

Ectoplasmic Embrace (Su): Calling upon the energies of the Astral Plane, the ghost can entangle a single target with a standard action (Reflex save to avoid). The silvery, hair-like strands are pernicious and grow back far too quickly to make cutting with a blade effective. The victim can attempt an Escape Artist check or pry themselves free with a Strength check (DC 20 + the ghost’s Charisma modifier). Once a subject is entangled, the ghost can, with a standard action, command the ectoplasm to constrict the captive, attempting to crush its opponent and drain its life away.

Fetch (Su): This ghost usually appears as it did in life, though it completely lacks any facial features. As a full-round action, it can study a single living creature, whereupon it immediately assumes the appearance of its target. The effect is unnerving to the target, filling it with a deep sense of fear about its own mortality and causing it to become shaken. This is a fear and mind-affecting effect. For every 5 ranks that the ghost had in Disguise, increase the DC of this special attack by 2. The target is shaken for as long as the ghost assumes its likeness. The ghost can drop the facade as a free action.

Fouled Presence (Su): The ghost leaves a trail of lukewarm congealed blood in its wake, smearing a wide swath of crimson on walls, furniture, and carpeting. Anybody who touches the blood risks contracting a disease called blackvein. Blackvein causes a victim’s skin to swell and split, rotting it from the inside out (injury or contact, incubation 1d3 days, 1d6 Dexterity damage). The save DC for blackvein is DC 10 + 1/2 the ghost’s HD + Charisma modifier.

Glacial Aura (Su): Common to those who had originally died from exposure in the cold mountains, these ghosts radiate a blisteringly cold aura. Creatures in a 10-ft. radius from the ghost take 1d6 cold damage, while opponents in melee combat with these mountain ghosts take 2d6 cold damage when they attack (whether they hit or not).

Lesser Malevolence (Su): A lesser form of a ghost’s malevolence special attack, this ability often appears in the recently deceased as a weaker, but potentially lethal attack. To use this ability, the ghost must be manifested and trying to move into the target’s space (which does not provoke attacks of opportunity). The target can attempt to resist the attack with a successful Will save (DC 15 + the ghost’s Charisma modifier). A creature that fails suffers 1d6 damage per Charisma modifier point that the ghost has (ex. 1d6 points for a +1 modifier, 2d6 for a +2 modifier). The ghost cannot maintain this state, though, and appears on the opposite side of its target at the end of the target’s next turn.

Poisoned Malevolence (Su): This ability only works if the ghost also has the malevolence special attack. While the ghost is possessing a creature, its shared body gains a poisonous touch ability (as the spell poison, CL equals the ghost’s HD) as well as immunity to poisons. All of the creature’s natural attacks gain this poison ability. Should the ghost leave its host creature, the creature suffers as if poison had just been cast upon it.

Unliving Rage (Su): Unrivalled hatred for all things alive consumes this ghost, so much so, they fly into a rage much like a barbarian. While raging, the ghost gains a +4 bonus to Strength and Charisma and +2 turn resistance but a -2 penalty to AC. The ghost gains an additional 2 hp per HD, but these points go away at the end of its rage. While raging, the ghost can neither use any other special attack, Dexterity- and Intelligence-based skills, or abilities that require patience or concentration nor cast spells or activate magic items. Unliving rage lasts for a number of rounds equal to 3 + the ghost’s new Charisma modifier. At the end of its rage, the ghost can only take partial actions for the duration of the current encounter. The ghost can only rage once per encounter.

Other Types of Ghosts

While the ghost template does not include constructs or outsiders, GMs might consider dropping that restriction to create a truly unique ghost for their campaign. Ghosts that have been around for a much longer period of time could have different (or more) abilities than a newer ghost, though GMs should consider increasing the CR of their ghost with more abilities that the ghost might acquire. With examples like our own Flying Dutchman, Scrooge’s partner Marley in A Christmas Carol, Banquo in Shakespeare’s Macbeth, just a little imagination on why a ghost is a ghost will make your PCs think twice about making assumptions about the next ghost they meet.

Happy Halloween! What better way to enjoy your spoils (that is candy) than to accompany it with Lilith’s own wonderfully versatile ghosts. This day just wouldn’t be the same without them. Got any good ghost tales? Let us know.