Skip to content
Home / Delve into the Depths in the Kobold Blog / Monday Monsters: Quick Drake 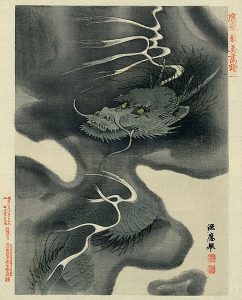 The hunter carried his prize, a clutch of tiny eggs, through the woods. The wind picked up around him as he walked, and he noted it had a particular bite. Wondering how the temperature could have dropped so quickly, the hunter absently felt his neck. His hand came away slick with blood. Then he felt the wind kick up again—the last thing he would ever feel. As the hunter dropped to the ground, a gray dragon the size of a cat materialized next to the falling body to catch the eggs before they could splatter on the forest floor.

A quick drake goes through life content to enjoy racing through forests, weaving and dodging trees, or racing headlong into a cliff faces only to pull up at the last split second, allowing its claws to graze the cliff as it climbs…

Their daredevil attitude leads them to raid their larger relatives’ lairs, often making off with prize gems and small magic items. Metallic dragons tolerate this childish behavior while chromatic dragons plagued by the drakes patiently wait for a quick drake moot to exterminate the whole lot of “vermin.”

Blur (Su) Due to a quick drake’s speed, it always benefits from a blur effect, which cannot be suppressed.

Flyby Sniping (Ex) If a quick drake makes a flyby attack from hiding, it can make a Stealth check with a -20 penalty on the check to hide again.

A quick drake’s body is built for speed. In flight, its narrow snout precedes a tapered head. Smooth scales cover the drake’s body, held together by a skeleton of hollow bones. Its relatively short tail serves as a rudder. A quick drake weighs 7 lb., its body is 15 in. long, and its tail adds another 4 in.

The creature uses telepathy to communicate with friendly intelligent creatures, but its garbled and distracted thoughts make communication difficult. When it dares to growl, the sound can best be compared to a lion cub’s attempt.

Quick drakes keep mostly to themselves, avoiding civilization and preferring to conduct daring raids only into true dragon lairs, but they have a profound effect on the local ecology. Their prodigious metabolism requires near-constant nourishment, and a quick drake can clear an area of small prey in a matter of months. They usually leave an area before they’ve devastated it for fear of reprisal from local druids and rangers.

A quick drake takes one mate in its 4-year life span. The pair produces one clutch of 2-4 eggs in their lifetime, and both parents raise the young drakes until they reach the 6- month mark and venture out on their own. Every 2 years, quick drakes meet up with others of their kind for a moot, where the creatures boast about their accomplishments and dare each other to demonstrate feats of speed. One or two impulsive drakes typically die from injuries sustained at these moots.

Quick drakes only get serious when something threatens their family. Then, their victims usually find it best to run away as quickly as possible or end up dying from many tiny bites and scratches.

A quick drake deigns to stay with a master who provides it with opportunities to use its speed in dangerous situations. A spellcaster with a larcenous bent can easily convince a companion drake to steal heavily guarded items. A character having an arcane spellcaster level of at least 7th and the Improved Familiar feat can take a drake as a familiar, subject to the feat’s restrictions. A quick drake egg can fetch a price of up to 10,000 gp. No one has ever successfully captured a hatchling.