Skip to content
Home / Delve into the Depths in the Kobold Blog / Monday Monster: the Shervage Wyrm

Beware the leaves of the fall in Shervage Wood, for beneath them hides the Wyrm, a thing of decay and rot, a slinking beast with two heads – one at either end. You may pass it by, thinking it nothing more than a fallen tree, yet it is alive, and hungry. Sheep and ponies are its staple, but many things go into the wood and do not return… 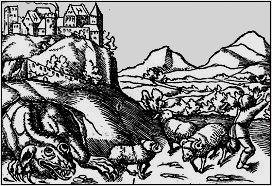 [More…]
The Gurt Vurm of Shervage Wood
“There was a tremjus gurt vurm up-over Shervage Wood. All a-lyin’ in and out the trees an’ round about the Camp, so big and fat round as two-three girt oaks. When her felt hungry her just u’n swallow down ‘bout six or sebm ponies or sheep and went to sleep comfortable.

Well then, by’n by, farmers do notice sheep idn’ upalong an’ there wadn’ more’n a capful of skinny ponies for Bridgewater Fair next year…

…The Vurm he were getting’ a bit short on his meals like. The deer an’ the rabbits they was all over to Hurley Beacon t’other side of the hills, and there wadn’ a sheep left, and the ponies, I reckon, had run down over valley to Forty Acre.

Now, I did hear there were a poor old soul who sold the worts for Triscombe Revel. Her made they tarts beautivul and filled’n up with a thick dap o’ cream that made ‘ee come back for more so fast as a dog’ll eat whitpot. Well. Look see, there wadn’ likely to be no tarts for her to sell on account of no one was going up over to see how worts was ripenin’, ‘n if her didn’ sell no tarts to Triscombe Revel her’d get no money for the rent. Poor old soul! Her was in a shrammle!

Well then, there come a stranger to Crowcombe, all the way from Stogumber I expect, and he were a woodman looking for work. So her up’n tells’n, ‘Why don’t ‘ee try cuttin’ in Shervage Wood upover, and look-see if worts is getting ripe?’ Poor soul he were desperate, see. So her give’n a cider firkin and bread’n cheese and watches’n go off up combe.

Being a Stogumber stranger he wadn’ used to Quantock hills and by the time he’d a-walked into Shervage Wood and seed a wonderful fine lot of worts on the way he were feeling ‘twere quite time for his cider.

So he looks round like and he seed a bit of a girt log in the fern…He’d just got nicely started on his nummet when the log begins to squirmy about under’n.

‘Hold a bit!’ Says he, picking up his axe. ‘Thee do movey, do thee? Take that, then.’ And the axe came down so hard on the log that he cut’tn in two…and both ends of the log begun to bleed.

Then the one end it up and run as hard as it could go to Bilbrook, and t’other end it runned to Kingston St Mary, and since they two halves went the wrong way to meet, the gurt vurm couldn’ nowise grow together again – so her died…

…Well then, the woodman he just sat and finished his nummet, and cut his faggot, and took the poor old soul a girt hatful of worts.

‘There were a dragon there furst go off,’ he tells her very thoughtful.

‘Her were a Crowcombe woman.’

TACTICS
Before Combat A Shervage Wyrm prefers to lurk in woodlands, hiding beneath fallen boughs and dead leaves so that it can make a surprise attack..
During Combat The Wyrm attacks ferociously, writhing into the thick of combat to enable it to use both its heads upon as many opponents as possible and trying to swallow whole those who put up the most resistance.
Morale If faced with a vorpal weapon, the creature flees immediately, and if greatly weakened (30 hit points or less) it will seek to bargain for its life, promising to move to other woods or even offering treasure. Its intention is always to return however and be avenged.

SPECIAL ABILITIES
Blindsense (Ex): A Shervage Wyrm can pinpoint creatures within a distance of 60 feet. Opponents the wyrm can’t actually see still have concealment against the wrym.
Improved Grab (Ex): To use this ability, a Shervage Wyrm must hit a large or smaller opponent with one of its bite attacks. It can then attempt to start a grapple as a free action with provoking an attack of opportunity. If it wins the grapple check, it establishes a hold and can try to swallow the foe whole the following round.
Regeneration (Ex): A Shervage Wrym will always be able to regenerate unless it is cut in two, an act which kills the creature. A successful vorpal attack, or a coup-de-grace carried out with an edged weapon on the wyrm after it has been reduced to 0 hit points or less, effectively slices the beast in two and kills it. No other form of attack will kill the creature short of a wish or miracle spell.
Swallow Whole (Ex): A Shervage Wyrm can try to swallow a grabbed opponent of large or smaller size by making a successful grapple check. Once inside, the opponent takes 1d8+5 points of crushing damage and 1d8+6 points of damage per round from the Wyrm’s digestive juices. A swallowed creature can cut its way out by dealing 25 points of damage to the creature’s digestive tract (AC 17). Once the creature exits, the hole is closed by muscular action, and any other swallowed opponents must cut its own way out.
Woodland Lurk (Ex): When still, a Shervage Wyrm resembles nothing more than a twisted and gnarled tree. It gains +20 to its Hide checks in the forest.

A Shervage Wyrm (for there are many in that dark forest) is a gargantuan dragon that smells of fallen leaves and looks like the floor of a forest. It lurks on the edges of civilization, where pickings are usually good, but it is always wary of men and will attack nothing more than a deer or sheep unless it is discovered or very hungry. The vast wrym resembles a fallen tree of great size but which, when angered or disturbed, rears its two heads – one at each end of its vast form. These maws are filled with foul teeth, which poke from its mouth like sharpened barbs and branches and broken boughs. It snout and flanks are strangled by ivy and moss.

Shervage Wyrm Lore
Knowledge (Local)
DC Result
10 A Shervage Wyrm (for many live in vast Shervage Wood) is a creature that lurks in forests, often pretending to be a tree or fallen bough. The creature often wanders to other lands in search of fresh meat.
15 Although the Wyrm likes to feast on ponies and sheep, it is not above eating the odd person. It tends to lurk in piles of leaves and fallen trees and is very hard to spot. Unfortunately the wyrm is very good at is spotting you.
20 Once angered, the creature is hard to fight – it has a great maw at each end of its foul wormy body (which is of massive proportions) and can swallow folk whole.
25 The Wrym heals very quickly, and the only way to slay it, they say, is to cut it clean in two.

A Mention of Calamitous and Unique Dragons in our Age
Once upon a time one hardly heard of dragons, or the ones that one did hear of were the sort of terrible and atrocious beasts that would ravage whole kingdoms, eat rocs and generally be totally intolerant of others of its kind – to the point of consuming all the competition. Such dragons were always ‘far away’ or in ‘distant lands.’

This, of course, was a good thing.

Nowadays however, it seems one can hardly move across the countryside without coming across some local wrym, dragon or serpente (always, you’ll note, with that extra ‘e’ to set it apart from your common-or-garden serpent). There seems to be an infestation of dragons across the kingdom – The Burley Beacon Dragon, the Dragon of Wantley, the Lambton Worm, the Linton Worm, the Longwitton Dragon, the Loshy Hill Worm, the Lyminster Worm… every village these days, it seems, has its monster. I have made a humble attempt to compile these unique dragons in my book ‘A miscellany of tyrannical dragons, wyrms, worms, serpentes and fire-breathing lizards’ and would be most glad to supply you with a copy upon request and the sum of two guineas and sixpence to cover my fees.

And with every dragon comes trouble of a unique and unpleasant sort, which is why we Magisters have petitioned the King for adventurers – be they bold or brain, sly or sure – to rid the land once and for all of these creatures.

We can only hope our prayers will be answered.

Hope you enjoyed this local legend from the UK. If you have a monster you’d like to see appear in the Monday Monsters series, tell us on the Forum.