Skip to content
Home / Delve into the Depths in the Kobold Blog / Grand Duchy: Meet Me at Treadwell’s 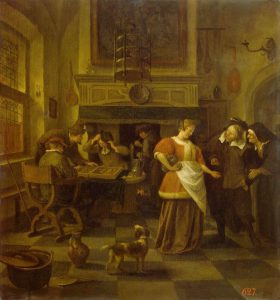 Experienced travelers, including adventurers, who plan an extended stay in Hirschberg inquire: Are there any vacancies at Treadwell’s?

The boardinghouse sits on the intersection facing the Street of Blades where it meets the Road to Salzbach. It’s hard to miss. The two-story, L-shaped building is painted smartly in maize, with its shutters and trim in white. A canopy with decorative latticework is over the entrance.

In the morning, the inviting smell of baked fruit pies comes from its first-floor kitchen. In the afternoon, it’s the rich spicy odor of a bubbling stew.

The boot scraper and brush at the front entrance are meant to be used. Guests who wish to impress Mrs. Treadwell are advised not to track mud into the parlor.

Eliza Nell Treadwell is a tidy, cheery dwarf with a wide smile who, though broad-shouldered and broad-hipped like many of her race, moves gracefully across the floor and handles her many duties with alacrity. Well into her middle years, her once-golden hair has lightened considerably and is kept in a tight bun. Octagonal glasses are perched low on the end of her round nose, and she wears a plain apron over her clothing, which is usually a blouse with matching vest and long folded skirt with only a touch of decorative embroidery.

She is closely tied into Hirschberg’s minority community of dwarves, especially kin hailing from Grisal, and occupies a position of prominence as a successful business owner. Mrs. Treadwell has never traveled more than a day beyond the city, however. Any long journey, such as to acquire replacement parts for their dwarf-made stove, is delegated to her husband, Fud Treadwell.

Fud serves as the boarding house’s caretaker, and he is a quiet, diligent worker who mastered the art of stretching his replies of “Ye-up” and “No-ope” into two syllables. He still refers to Mrs. Treadwell as “Mother,” even though their own four children have grown and moved away. By dwarf standards, Fud has a narrow frame, and he is bald with a trimmed beard.

As Mrs. Treadwell handles the housekeeping duties, the kitchen is the domain of her cousin, Frieda Tallowgem. She is up before sunrise making a full breakfast for boarders, spends the morning baking biscuits that are set out on a tray for afternoon tea, and adds breads and fruits pies for dinner and dessert. She spends the noon hour at the market, then devotes the rest of the day to the evening meal. The Ceresday evening meal is more extravagant, including a roast of fowl or beef and additional side dishes. Frieda “rests” the stove on Khorsday (and other festival days), but sets out a tray of cold cut meats, cheeses, bread, and a pitcher of weak wine on those occasions.

The dining room is upstairs over the parlor. Meals are delivered by means of a dumbwaiter from the kitchen. Boarders pay for, and are expected to attend, breakfast and dinner. Meals will not be taken to a boarder’s room except when they are ill or injured and under a priest or physician’s care.

Three apartments are on the first floor and three on the second floor, not counting the rooms above the kitchen for the Treadwells and Frieda. The apartments sleep two comfortably and can accommodate a family of four with cots, but they are usually let out to single travelers. Rooms with meals are 1 gp per day.

When PCs call upon Treadwells, the boarding house has 1d4+2 boarders in residence. Roll 1d20 for lodger descriptions.

1 thought on “Grand Duchy: Meet Me at Treadwell’s”