Skip to content
Home / Delve into the Depths in the Kobold Blog / Monday Monster: Dancing Tableware 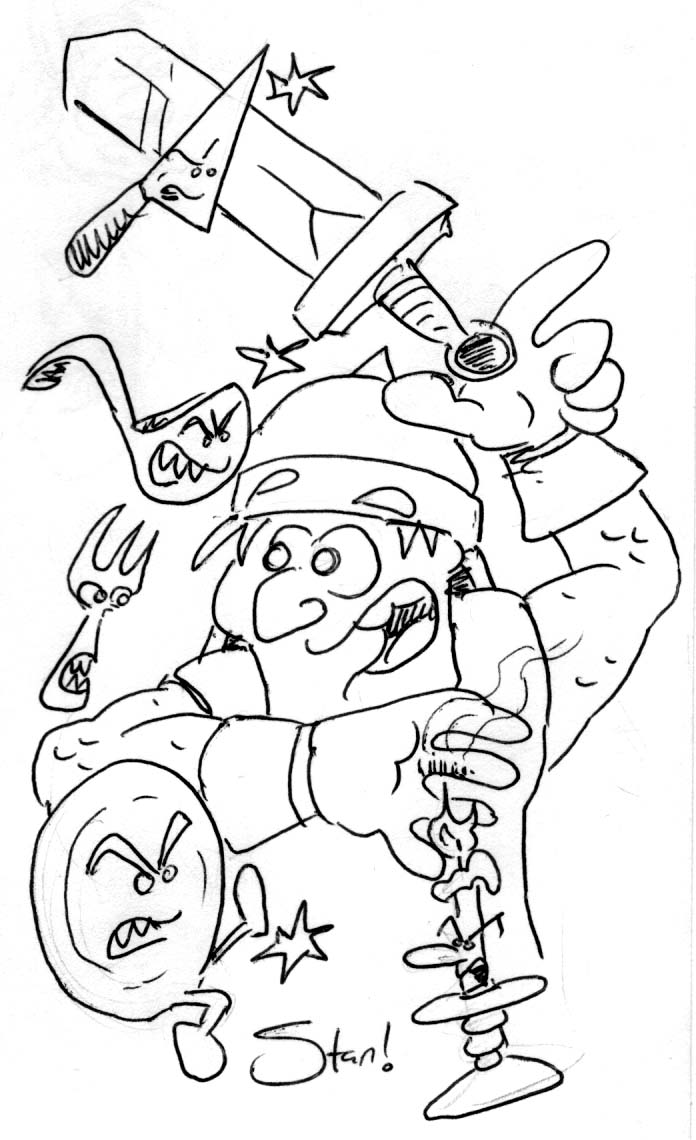 …Sturmgar kicked in the door, and strode into the hall, greatsword drawn. Sir Norrick and the rest of the Company of the Wyvern filed in behind him, weapons and spells at the ready. The officers of the Iron Legion were in the midst of their evening meal. At the head of the table, General Sidion looked up, displeased.

“Sidion!” yelled Sir Norrick, “Your reign of evil is at an end!”

Chairs fell away as the officers stood to defend their leader. The impetuous heroes charged, and the hall rang with the sound of steel on steel and glowed with flashes of magical energy. [More…]
Behind his soldiers, General Sidion stood up and clapped his hands. “Order!” he barked. At his command, the dishes and cutlery on the table suddenly stood at attention like veteran soldiers, though stained with gravy rather than blood.

Sidion spied the party’s sneak thief slinking around the melee. As Rafiya prepared to strike, the general pointed in her direction and called, “Attack!” The tableware charged forward with no cry but the clatter of a bustling kitchen. Before she could throw her dagger, a carving knife sliced at Rafiya’s outstretched arm. Then a tureen barreled into her leg causing it to buckle.

As Sturmgar’s sword cleft the man in front of him, the barbarian took a second to scan his surroundings. General Sidion had fled the hall. Rafiya lay unconscious beneath a pile of chipped dishes. Sturmgar had no time to pause and wonder, as masses of silver tableware started marching toward him…

Special Abilities
Be Our Guest (Sp) Dancing tableware can produce a heroes’ feast once per day as a spell-like ability (CL 12th), except that they produce only food and drink. The dancing tableware themselves act as servers and service.

Distraction (Ex) Any living creature that begins its turn with a dancing tableware swarm in its space must succeed on a DC 16 Fortitude save or be nauseated for 1 round. The save DC is Constitution-based.

Everything but the Kitchen Sink (Ex) A dancing tableware’s swarm attack deals bludgeoning, piercing, and slashing damage. If many or all of its constituents consist of a special material – silver is particularly common – its swarm attack overcomes the corresponding DR.

A swarm of dancing tableware comprises a complete service for twelve, including plates, bowls, cups, knives, forks, spoons, platters, pitchers, gravy boats, and even candelabra. The individual pieces move with a kind of hopping motion, and together they might travel with military precision or wild exuberance, as befits their owner. Though of limited intellect, dancing tableware do their best to cater to the needs of their master and his guests. Yet if someone endangers their owner, the tableware swarm can quickly turn against the unwelcome guest.