Skip to content
Home / Delve into the Depths in the Kobold Blog / Book Review: Sword of the Bright Lady by M.C. Planck 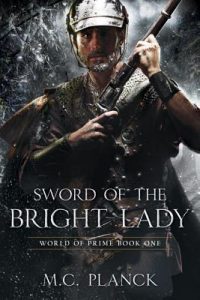 Christopher Sinclair is a normal mechanical engineer who lives in Arizona. He has dogs and is married. About the only thing about Christopher that is really unique is his love of the ancient art of Kendo. One evening he takes his dogs for a walk and never returns. He awakens in a strange world that is in the throws of a severe winter storm under a night sky that is not the one he knew on Earth. He stumbles into a small village and collapses on the steps of what passes for a church in this world. He is taken in and nursed back to health. An act of chivalry leads to a brawl with a nobleman and gets him placed under a death sentence. The only way to avoid this ultimate punishment is to join an eternal war serving as a priest for a goddess known as The Bright Lady.

In this world, magic is real, and The Bright Lady is the goddess of healing. Christopher, when seeking the acceptance of The Bright Lady, is intercepted by her consort, Marcius, the god of war. Marcius promises that if Christopher serves him, he will help him get home to his wife and the world he knows. Every action Christopher takes seems to lead him to duels to the death or unspeakable violence, all of which gains him magic that will help him become powerful enough to survive and possibly get home. Being an engineer, Christopher has plans on using his knowledge of modern Earth technology to try to survive his enlistment, but Christopher isn’t the only one with plans. Between his plans and the plans of the gods, they could change the world he is stuck in, or destroy it.

Does this plot sound familiar? It should, because it has been done before—quite often. Stranger in a strange land is not a new theme but seldom have I seen it done this well. When someone can take something that has been done as often as this has and make it feel fresh, they deserve to be recognized. Planck made Christopher a smart guy. Some might argue overly smart, but all of the engineers that I know tend to be that way. Christopher’s ideas are well within the acceptable range of someone of his vocation. What tends to cause Christopher the most problems in the new world he finds himself in stem from his American ideals.

His first and almost fatal misstep comes when he sees a well armored and very unlikable man taking a young lady from her lover. Christopher intervenes and quickly learns how opposite from Arizona his new world is. He learns that in this new world, magic is real and power is gained by harvesting it from the bodies of slain foes. The more foes you slay, the more magic you absorb, and if you absorb enough magic, you ascend to a higher level. The higher the level, the stronger your powers, but the path of destruction that is left is not insignificant. The common people suffer the greatest from this system (no surprise there) and being an American, Christopher rails at the lack of individual rights and also at the privilege that nobles are granted.

Those ideals keep Christopher in constant trouble, but they make for a great story. There comes a point where Christopher has to make some really tough decisions that will test those ideals, and while he has to compromise, he never lets go of them. His ability to rise above the feudal magic system makes him a danger to even his allies. Those ideals pose a huge threat to the entire fabric of the society that Christopher finds himself in. Christopher is a game changer on many fronts, and most of the time he doesn’t mean to do it. His almost child-like innocence combines with a passionate intellect and makes him an interesting character—the kind of guy you want to hang around, just to see what happens next.

When accepted by the god of war, Christopher is to be true to himself; that becomes his mantra and during the course of the book it serves him well. Like his ideals, being true to himself gets him in trouble, but it is ultimately just more seasoning that makes this book so flavorful. Christopher is the first priest of the god of war that has been seen in over fifty years—combine this with not being a local, and as a reader you can see just how complicated things are for this mechanical engineer. Planck doesn’t go easy on Christopher, but he doesn’t abuse him either.

The reader learns about this new world as Christopher does. This discovery learning process kept me turning pages. I wanted to know more about the world, and Planck’s writing made me want to learn. Seeing how some of the ideals that I was raised with as an American play out in a different culture was a real treat—sure it is harder to honestly view oneself in the mirror, but it is actually pretty healthy and Planck made Christopher my mirror. There are many issues that are covered in this book, and they are all covered with an umbrella of a good story set in an interesting world that is just different enough from our world to excite readers. Maps should have been included, and while I got the ending, it wasn’t how I wanted the book to end. Fortunately, this is the first book in a series, and I can’t wait to see how Planck challenges me as a person and as a reader.