Skip to content
Home / Delve into the Depths in the Kobold Blog / Journeying to the West: An Interview with Christina Stiles 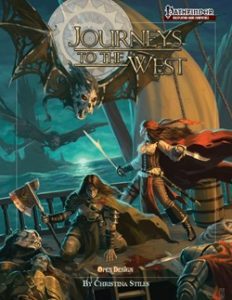 Come see what Christina Stiles has to say about the Open Design process (and more!) for Journeys to the West.

Tell me what’s awesome about your new Kobold Press adventure anthology Journeys to the West.

It’s sea-faring adventure. What’s not awesome about high-seas escapades and exploration? Plus, we’ve thrown in enough new monsters and islands to keep a campaign going for quite some time. Although these are set in Midgard’s Western Ocean, a GM could really place them in any campaign with no trouble at all.

How did you get involved with the project?

I was a senior patron on the Midgard Campaign Setting, and I sent in a pitch for Wolfgang’s Open Design project-pitch call. The other project patrons selected it as the winner, and a journey across the Western Ocean began. By the by, this project happens to be the first one Wolfgang Baur offered up through Kickstarter. It definitely grew in scope because of that venue.

What does Journeys to the West bring to the Midgard Campaign Setting?

First, it greatly expands on material in the setting book. For instance, the city of Barsella and the Isle of Morphoi were originally toys Brandon Hodge created for the Wasted West section of the book. If you are interested in seeing what Barsella actually looks like, who you might encounter there, and what types of adventures can be had in the city, then this book is for you. It does the same for the Isle of Morphoi.

Second, it brings loads of adventuring opportunity! GMs running a sea-based campaign can just plug in these islands and spin off the ideas and hooks offered therein. And, of course, we provide the GM several ready-made scenarios to use. They aren’t tied together, but they easily can be—and I do have a story arc to offer up soon that can provide that connection.

Additionally, many gamers indicated they would be using it to round out their Paizo Skulls & Shackles Adventure Path.

What were some of the design challenges you encountered (if any), and how did you overcome them?

I didn’t so much have design challenges as other challenges. I’ve run a few projects before (SpirosBlaak, Odyssey Prime, Rogue Mage), but never anything like an Open Design one. The challenge for me was trying to keep up with all the patrons’ conversation and brainstorm threads on the forums. We had an exuberant group with good ideas, many questions, and lots of pitches. But then again, keeping up with it all may just be a problem inherent to me: I sometimes think I have a touch of ADD; I know I definitely have a big case of INTROVERSION.

Anyway, that was the hardest part of the project for me. I truly don’t see how the other project winners have managed it all—write things, polish others’ work, and respond to all the questions and notes at the same time. Tackling an Open Design project, especially one this large, is a definite juggling act. Ben McFarland (Kobold Press’ developer and my co-leader on the current Midgard Tales project) and Wolfgang really were great about coming to my aid in this regard, and they are master jugglers extraordinaire. I bow to them.

Do you have a favorite moment from working on this book with the Open Design community, or a particular designer?

Lol! Can I say that holding the hardback book in my hands was the greatest moment? Seeing something actually come to fruition is the high point for me. When I’m deep in the process, I’m enjoying it, certainly, but nothing beats seeing the final result.

Also, working with the Open Design community was a lot of fun. What’s great about the patron process is all the contributions patrons make to the book. Had I truly created this book alone, Barsella, Morphoi, and other pieces of the book would not have been what they turned out to be. There are just so many little gems throughout the design that our wonderful community contributed. Open Design projects are genuinely beautiful products of collaborative creation, and that’s what I’ve enjoyed about them over the years I’ve been involved in them.

They also serve as great venues to new freelancers. I truly enjoyed working with the new talent who pitched on the project. I’ve made some good friends among them, and some, like Andrew Christian, I’ve since gone on to work on other projects with.

Have you ever been adventuring at sea yourself?

No, not me, unfortunately. I’ve been a landlubber lo these many years. I am intrigued by the idea of a gaming cruise, however. That’s something that could get me out on the ocean. My buddies in NC who put together the MACE convention are pulling one together this coming year. Ah, if I was rich and had oodles of vacation time.

What’s next on the horizon for you?

Well, in terms of Kobold Press releases, there’s that teeny, tiny Midgard Tales project that has just gone into the editor’s hands. That editor would be me. Thirteen fascinating adventures set in Midgard and developed by Ben McFarland—Wolfgang and I are writing companion adventures to the tome, as well.

Then, I have a New Path piece with Andrew Christian (from the Journeys project) that should see the light of day in the new year; some writing in the Midgard Legends book; and whatever else the Kobold Overlord finds for me to do over the next few months.

Other projects of mine on the horizon include the completed Rogue Mage RPG Game Master’s Guide and entries in two books so far for Paizo’s Player Companion line: Animal Archive and Champions of Purity. I’ll be doing some work with SpirosBlaak in 2013 with Misfit Studios, as well.

5 thoughts on “Journeying to the West: An Interview with Christina Stiles”