Skip to content
Home / Delve into the Depths in the Kobold Blog / Midgard Notebook: New and Old Schools of Midgardian Magic

One of the principles behind the revised Midgard Campaign Setting is the “Dark Roads & Deep Magic” ethos. Not surprisingly, this means additions to player and game master options alike with the incorporation of new schools of magic from the Deep Magic series.

The existing school of heavily Midgardian magic are well known: ley lines, clockwork magic, and the illumination school all have extensive support in both 5th Edition and Pathfinder Roleplaying Game sourcebooks from Kobold Press. Others are certainly common in Midgard but common elsewhere, as well, such as rune magic, chaos magic, and battle magic. 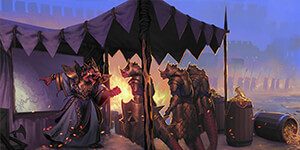 Other schools are a bit more esoteric, as it were. Ring magic has been a thing among the dwarves since the Ring of the Nibelung, and it has a little history in the PFRPG Deep Magic and the 5E Tome of Beasts, but it’s hardly a full-bore treatment of the topic. Void magic is similar, though its roots are in the Cthulhu Mythos and the Midgard use of void as a touchstone for the outer darkness of horrors beyond mortal understanding. Void magic belongs to the category that I think of as “NPC magic” or “villain’s magic.” We’re expecting to keep the dark side options like necrophagy, dooms, void magic, and blood magic as material aimed at the GMs. That means it goes into the setting book, not the player handbooks.

This goes likewise with themes like mountain druids, dragon magic, high elvish ritual, minotaur labyrinth magic, and shadow magic (illumination’s more dangerous twin). I’m hoping we’ll be able to bring all of those (and others) into the player handbooks for Midgard. They are stretch goals at this point because at some level the player handbooks get more expensive to print and ship if we jam another 100 pages or 150 pages into them. I certainly hope that can happen.

That all said… there’s always room for more. We’re looking at entirely new options, as well, from more vril magic to the hidden secrets of Sikkim and the everyday magic of, say, priests of the apocalypse (because Midgard is nothing if not doom ridden!). What of the magic of the giants? What of the elemental magic of the fire priests of Mharot and Ishadia? What can we do to expand the choices for pyromaniacs, elfmarked enchanters, and cunning whispering warlocks?