Midgard Icons: Emperor of the Ghouls 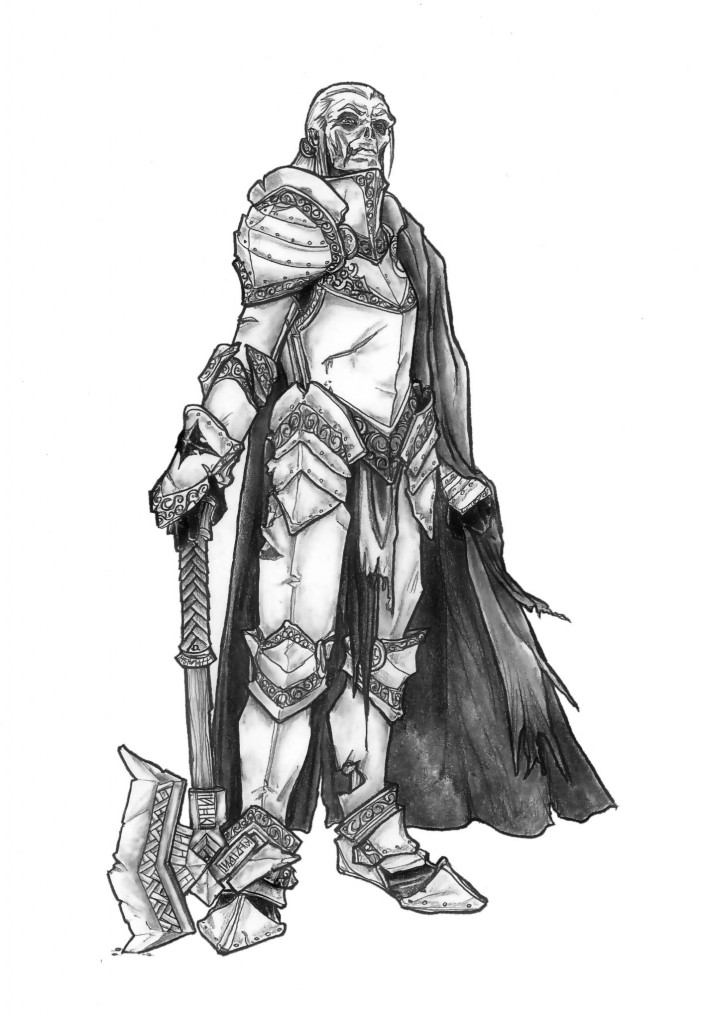 13th Age is the new fantasy roleplaying game from co-designers Rob Heinsoo and Jonathan Tweet. Due out in spring from Pelgrane Press, it’s already attracted a sizable and devoted following by making rules-in-progress drafts available to pre-order customers.

In 13th Age, player characters are grounded in the setting through connections to powerful nonplayer characters known as icons: heroic, villainous and ambiguous figures whose schemes and rivalries shape the course of history.

Midgard Icons is a new series that presents some of the Midgard Campaign Setting’s most influential NPCs as 13th Age compatible icons. You can bring Baba Yaga, the Queen of the Shadow Fey, and others into the game’s default setting; run a 13th Age campaign set in the world of Midgard; or just port the icon relationship rules into whatever system you use to run your Midgard games.

To kick things off, let’s meet one of Midgard’s most terrifying villains:  Nicoforus, the Emperor of the Ghouls.

Emperor of the Ghouls

Nicoforus the Pale is the undisputed ruler of the Dread and Endless Imperium of the Darakhul, a civilization of ghouls deep within the realms subterranean. Through cunning and relentless cruelty he’s led his legions to repeated victories over the other races in the underworld. Drow, dwarves, kobolds, gnomes – all are slaves or food for the darakhul. Only the ghouls’ aversion to the sun keeps the Imperium from invading the surface world.

“Rejoice, meat: you will have the honor of feeding our royal person.”

In the White City of Darakhan, or in his pleasure palace at Vandekhul on the shore of the Sulphur Sea.

The Imperium is an undead civilization fueled by inhuman hunger and animal fury. It works tirelessly to extend its power, fighting an eternal war against all that lives and breathes. Well-hidden, it has bided its time for a century, growing in strength, in knowledge, and in numbers.

Nicoforus the Pale is the emperor of this grim, charnel realm. The few living creatures who have seen him and survived report that he appears as a man of middle years, his hair black and his flesh as white as ivory, wearing purple and black clothes and a silvery crown set with emeralds. He never goes anywhere without his two bodyguards and four personal servants, and is usually accompanied by a retinue of scribes, priests, powerful merchants, council members, and an honor guard of 20 Iron Ghouls. All ghouls revere their emperor as almost godlike, and they will protect him fanatically.

Nicoforus trusts the arcane powers more than the divine ones of the various high priests, and under his rule the masters of necromancy known as the necrophagi prosper. Despite a constant risk that their hosts may forget their manners and eat them, necromancers leap at any opportunity to study death magic at the fane of the necrophagi in Darakhan.

Evil clerics of the death god Anu-Akma, the hunger god Vardesain (known to humans as Mordiggian), the war god Mavros, and the Goddess of Night and Magic may seek out the Ghoul Emperor, as do those diabolists whose rites include carrion and cannibalism.

Nicoforus and the vampire prince Lucan maintain a pact of mutual aid between the Empire of the Ghouls and the Principality of Morgau and Doresh. Neither wishes the other to dominate, but neither wishes his own lands to be threatened by paladins, priests, or other scourges of the undead.

The Queen of the Shadow Fey would receive Nicoforus as a guest if he cared to call, and she maintains an embassy in Darakhan. His slaughter of the drow marks him as her enemy, but the pragmatic queen prefers to manipulate the Ghoul Emperor rather than attempt to destroy him.

The Archwizard of Bemmea understands the Ghoul Emperor well, having magic and long life in common. The Glittering King of the Slavers of Reth-Saal does not much care where his wares end up and the Imperium’s need for slaves is never-ending.

Ultimately all living, sane beings oppose the plans of the Ghoul Emperor.

Four great emperors have ruled the ghouls, giving homage to the Death God Anu-Akma and to Mordiggian, the Demon Lord of Ghouls, also called Vardesain.

For the past twenty years, Nicoforus the Pale has held the empire together through cunning and relentless cruelty. He took revenge on the drow for his predecessor’s death by assassinating the high priestess of their largest city and then destroying it utterly. His legions took all dark elves in the city prisoner, eating the weak and transforming the strongest into ghouls.

Everything will be all right provided that the Ghoul Emperor never finds a way to overcome his legions’ vulnerability to sunlight.