Skip to content
Home / Delve into the Depths in the Kobold Blog / Monster Monday: Brandig 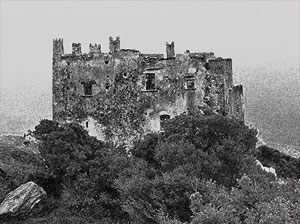 Powerful brandigs are among the greater dead, boasting superior reflexes and intelligence coupled with an uncanny ability to track their prey over great distances. These creatures are vaguely humanoid in appearance, though they have gray-green skin that drips fire and smoke, and their eyes burn with the soul of a dead spirit.

Brandigs are often generals with legions of ghouls and other horrifying lesser undead creatures under their command. They lead from the back with their devastating spells, yet are not to be trifled with in single combat. The armies of humans fear these undead creatures, and for good reason—many a ghost story has been told of a brandig whose armies rise from corpses almost as quickly as they can be put down.

Daylight Weakness (Su) Brandigs subjected to natural daylight (not just the effects of a daylight spell) lose hit points at a rate of 5 per round.

Fear Aura (Su) A brandig can radiate a 15-foot-radius fear aura as a free action. A creature in the area must succeed on a DC 24 Will save or be affected as though by a fear spell (caster level 15th). A creature that successfully saves cannot be affected again by the same brandig’s aura for 24 hours. The save DC is Charisma-based.

Necrosis (Su) Victims of a brandig’s vile bite attack must make a Fortitude save (DC 26) or immediately take 1d6 points of Strength, Dexterity, and Constitution drain. If any one of these abilities is reduced to 0, the creature rises as an undead creature in the control of the brandig in 1d4 rounds. The creature type is dependent on the ability score that has been reduced to 0, as noted on the table below. If the creature is capable of creating undead (such as the bodak with its death gaze ability), any undead creature spawned from that creature is also in the brandig’s control. The save DC is Charisma-based and includes a +2 racial bonus.

Environment Negative Energy Plane
Organization Solitary, or solitary plus 3–12 undead of types found on the necrosis table (see below)
Treasure None

DC 24 Brandigs are among the most powerful undead. They are highly intelligent, expert trackers, and cruel beyond imagination. Their armies of tireless undead have been known to track prey for weeks at a time.

DC 29 The brandig’s bite is known to drain a body of its life force. Those killed by its bite have been seen rising again as terrifying undead.

DC 34 A brandig’s body drips both fire and acid; it is known to be immune to such energies and harnesses them to damage foes. Like many undead, brandig are weakened by natural sunlight, but they are also threatened by cold iron.

DC 39 Some brandigs serve powerful necromancers and liches. The death of their lord may cause infighting among the undead as they vie for supremacy.

Brandigs use their inflict critical wounds, mass spell to harm enemies and heal undead allies simultaneously. They prefer to stand back and hinder foes with cloud spells, resorting to physical combat only when threatened or when an easy kill presents itself.