Skip to content
Home / Delve into the Depths in the Kobold Blog / Midgard Expanded: The Travels of Lucano Volpe, or the Sky City of Sikkim 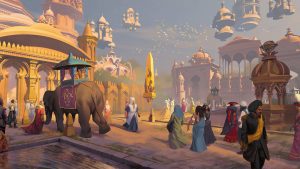 Having made our escape from the wicked spider slavers by means of Qatin’s gravity-defying magic, Agosto and I helplessly soared higher and higher into the sky. The exhilaration of freedom quickly gave way to stark terror.

“Agosto!” I shouted. “We appear to be rising up into the sky at an alarming rate!”

“That is true, master!” my servant called back to me.

Agosto gave me a cheeky grin. “I know not, master. But at least we have escaped the spiders!”

We plunged into the low-lying clouds that seem to perpetually shroud the Plateau of Leng, and I felt my servant grab a hold of my jacket to tether us together. Of Qatin there was no sign. I know not if the plucky Lengman survived, though I pray to all the gods that he did so.

Clouds, as it turns out, are not solid things. They are as the fog. Wispy, wet, and filled with vapor.

Flying cities, on the other hand, are remarkably solid.

Agosto and I burst out of the clouds to behold a wondrous sight. A Flying City of Sikkim shining in the sunlight directly above us. The city itself appeared to be a series of concentric rings, the widest at the bottom and the narrowest at the top, stacked like some child’s toy. Except these rings were easily a thousand feet or more in width (or height depending on your viewpoint) and a mile in circumference. As we approached the city, I could see what looked like farms on one ring, buildings on another, and sculptured gardens on a third.

Understand, gentle readers, that these everyday sights were made miraculous by the fact that they were on the outer surface of the rings, perpendicular to the ground far below. It was as if gravity for these rings pulled toward the inside of the city rather than toward solid surface of Midgard.

The flying city moved across the sky as we soared toward it, and it became clear that we were going to strike the underside of the city itself. This was a flatted surface, a solid undercarriage covered with the roofs of buildings, all of which pointed straight down toward the ground.

“If someone there looks up and sees us,” Agosto shouted. “Perhaps they shall catch us!”

“They had better hurry!” I retorted as the buildings rushed at me.

I had an instant to see a red canopy before we struck, and then I knew no more for a time.

When I opened my eyes, I was resting in a comfortable bed while a wizened man examined me. A glowing needle or pin of some sort stuck up from the center of my bare chest and my hands and arms were bandaged.

“Rest easy, my friend,” said the man. “To have people falling from the sky into our midst is a most novel occurrence for us, I assure you.”

I attempted to sit up but fell back, too weak to move much.

The man grinned, his teeth gleaming against his leathery brown skin. “Your companion also rests. He is nearby and safe. I am Rangdol, a healer of the fifth order. Welcome to Tseten, Jewel of the Sky.”

I indicated the still glowing pin, and Rangdol chuckled.

“Yes, yes. It has done its work.” He plucked the pin out of my chest. “Now, you should be feeling better. Come. I will take you to your companion.”

Pulling on the yellow robes he held out for me, I quickly dressed and followed him out into the flying city.

Before I continue to describe the wonders of what I experienced in the Sikkim city, I must impart a bit about that marvelous healing magic which Rangdol used.

Once per day, when inserted into the body, this needle cures one condition as if the lesser restoration spell had been cast upon the target. The restorative needle regains its charge daily at dawn.