Skip to content
Home / Delve into the Depths in the Kobold Blog / Midgard Expanded: The Travels of Lucano Volpe, or Captured by Monks 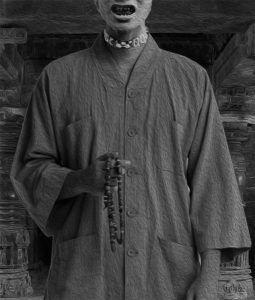 Part 8, Captured by the Monks of Leng

Woe and calamity! Imagine the worst that might befall a traveler, and that thought pales in comparison to what has happened to Agosto and I!

Desert duststorms drove us Northward for three more days in clouds of choking grit and sand. But on the fourth day, the sky cleared, and it was then that we saw the black city lurking at the base of the cliff-like mountains. We stopped to refill our waterskins at an oasis, and the nomads there greeted us kindly if with some hesitation. They shared with us their native food, a flour-like substance they called tsampa.

Here is how tsampa is eaten. You fill a bowl with tea and to that add a dollop of yak butter. Pour into the bowl a measure of tsampa. Next, you stir with the fingers, kneading while twisting the bowl around and around until the mixture forms into a dumpling that is then ingested with more tea. I fear it takes much practice to get the proportions right for my bowl produced a lump of desiccated dough and Agosto’s was naught but a sticky paste. Still the meal did wonders to reinvigorate us.

Of Leng and a Calling Dream

After the meal, I asked about the black city. They said it was once Sarkoman, a place of wonders, but is now deserted.

“Why,” I asked the eldest nomad.

“Leng,” he replied gravely, and the other nomads muttered in fear.

From what I was able to gather, “Leng” is the name of the high plateau to the north. It rests at the roof of the world in the middle of the massive range of mountains. The nomads told fanciful stories of the creatures who inhabit the plateau. I pretended to take them seriously, but it all sounded like tales to frighten children. Now, I wish I had paid them heed!

That night I had the strangest dream. I was walking through a deserted city of black stones and something, or someone, was calling to me in the voice of my beloved Marta Cazagoza. In the morning, perhaps touched by this night vision, I decided that we should investigate Old Sarkoman. The nomads called us fools, but we set off despite them.

The streets of the deserted city are all flanked by double rows of pillars, and the fragments of fallen stonework littered the cobblestones. Sarkoman is not entirely black, yet all of the stonework ranges from deep gray to ebony in color; giving the entire city a foreboding countenance. Great empty urns entwined with decorations of writhing vines or perhaps appendages suggest gardens, but any greenery is long since withered and bare. All of the streets come together at the center of the city in a vast round plaza. There, at the center of that expanse stand two massive statues of winged lions. An obsidian dome, almost completely smooth, rests between the beasts. I should have liked to investigate that dome, but without warning, cloaked figures rushed at us from every direction!

On Monks of Darkness and Sharpened Teeth

I am sad to say, we were captured quite easily. Indeed, the speed of our attackers did not even give us time to draw our weapons. They appear to be dark-robed humans, bald with intricate tattoos upon their scalps. Around their faces, they wrap green scarves so that only their eyes can be seen. However, once we lay bound before them, these men removed their scarves revealing sharpened teeth in their cruel mouths.

Using the smattering of the Eastern tongue that I had learned during our travel, I tried to parley with them and was told that we were now the prisoners of Zhong Mok, and for violating the ancient city, we would be taken to Leng and given over to the spider gods!

Price 2 gp; Weight 1lb.
Tsampa consist of a roasted flour or powdered grain that is rounded out with a strong tea and usually some manner of animal fat or butter. Mixing the ingredients produces a dumpling that provides a single day of sustenance. Once per day, tsampa can banish feelings of weariness, negating any natural fatigue or exhaustion. Tsampa has no effect on magically induced conditions and does not negate the need for rest to recover spells or abilities.

4 thoughts on “Midgard Expanded: The Travels of Lucano Volpe, or Captured by Monks”