Skip to content
Home / Delve into the Depths in the Kobold Blog / Book Review: The Geomancer by Clay and Susan Griffith 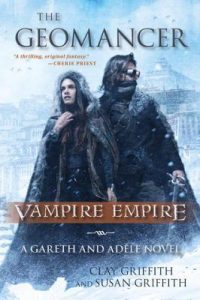 The vampire/human stalemate is over, and Adele and her vampire consort Gareth are slowly bringing order to a Britain no longer under vampire rule. A series of bloody murders throughout London has led some to believe that Adele’s geomancy is failing and that the powerful vampire clans might once again return. New power could tilt the balance back in the vampires’ favor, and that mysterious power is using geomancy as well.

This deranged human geomancer is known as the Witchfinder, and he is in the employ of the vampire clans. The Witchfinder has found a way to kill large numbers of humans using geomancy in much the same way that Adele could kill vampires. This novel starts in a struggling Britain, moves to the vampire-infested streets of Paris, and even goes all the way out to Tibet, as Gareth and Adele fight side by side as warriors and lovers.

Many readers were excited to read more about Adele and Gareth. This novel, while charming, was much harder to get into than my experience with these authors in the past, and the vampire trope started to give me a stale taste. After the action picked up, though, I remembered why I enjoyed their earlier writing so much. Unfortunately, when there is little or no fear of a character dying, the cliff from which authors often leave readers hanging feels more like a ten-foot-tall overhang with lots of padding right below it.

First, the cover of this novel is compelling and interesting. Pyr gets some high-quality artists, and this is no exception. One of my friends saw the cover and wanted to read it based on that alone. Not all good covers equal good books, but, for the most part, this was a good book with a good cover.

Again, though, I really did have a hard time getting into this novel. Very often that is caused by circumstances rather than a novel itself, but in this case I had to fight my way through the first few chapters. The book starts out with a murder—or feeding, depending on which side of the coffin you are on. Even with that, it is hard to identify with a set of characters who have basically unlimited resources and when one of them is really, really, really hard to kill. The Griffith duo did a good job of inserting some situations where Adele and Gareth were in peril, but at no point did it ever feel lethal.

Beyond the normal claws-out fighting that one would expect from a novel involving vampires, there were times when the authors explored deeper and less violent topics, like vampire culture, family bonds, and, of course, love. Some romance elements are in this book, but not enough of them to call it a romance novel. Several intimate scenes fade out just when they should have. The balance of these weightier subjects actually greatly broadens the possible audience base for this book.

Their take on vampire culture was stark and realistic. I tend to see vampires as very cultured, but the authors have taken a deeper and more disparate view. They scratch the seemingly cultured, gilded surface that hundreds of years of living can create to expose a very war-like and parasitic group that has no culture of its own. We are shown that vampires tend to parrot human culture even while viewing most humans as food or prey. None of this is new, but most vampires tend to be portrayed as either feral or debonair. After reading this book, I can see just how culturally impaired vampires actually are. Score one more in the refreshing category for the Griffiths.

I will do my best not to spoil the book, but there was one part of the book where Gareth was put in a situation that would seem mundane to most humans, but was very life-threatening for him. This little interlude was inserted very purposely, and the message is hard to miss. Even with this brief situation, as a reader I saw the symbolism, but I had no fear for Gareth. It is hard to make a reader fear for a character’s life, and the Griffiths need to take a page from the likes of George R. R. Martin and James Young: Kill a few beloved characters to make us worry.

The back of this book lists it as a character-based, alternate-history urban fantasy. That is at least three different audiences that should enjoy this book. There is just the right amount of romance mixed with some interesting but less than lethal-feeling action. The book length is just long enough to tell the story but not so long that you felt like it dragged on. The next book will be a really good indicator as to whether this series should be a trilogy as well.

Will I read the next book in this series? Yes. Would I recommend this book to most of my fellow readers? Yes. Did this book change my life? Far from it. As it stands, the Griffith duo continues to find a way to breathe life into to two well-used tropes and to make them work.