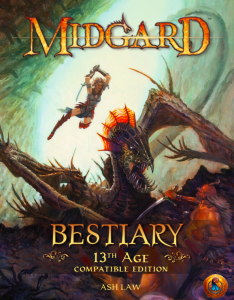 “The Midgard Bestiary combines Kobold Press’s dedication to quality and originality with Ash Laws’ enthusiastic and accomplished take on the 13th Age to serve you a gallimaufry of ghouls and golems.” – Simon Rogers, 13th Age publisher

Make your icon rolls—and hope for sixes! The Midgard Bestiary: 13th Age Compatible Edition brings 100 weird, warped and unpredictable new monsters to the fight. Designer ASH LAW (of Tales of the 13th Age organized play fame) has redesigned the greatest monsters from Kobold Quarterly magazine and Open Design’s award-winning adventures and sourcebooks for use in your 13th Age game — along with:

Get ready to face deadly foes from every corner of Midgard: the alleys of Zobeck, the empire of the ghouls, the courts of the shadow fey and the magic-blasted Wasted West. The Midgard Bestiary is full of exciting new creatures and NPCs including:

Use these monsters in the Midgard Campaign Setting, or bring them into the fantasy campaign world of your choice. Get the Midgard Bestiary today at the Kobold Store, DriveThruRPG, Amazon.com or Paizo, and unleash the dire weasels!