Skip to content
Home / Delve into the Depths in the Kobold Blog / Metron, Angel of Knowledge and Truth 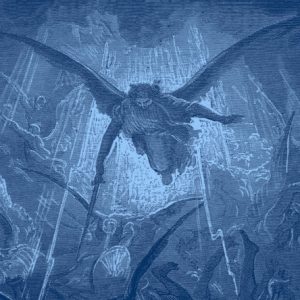 This man of gears and steel plates stands 10 ft. tall. A green metallic eye stares from the tip of each of its four wings.

Angel of Knowledge and Truth

Inevitables tasked with enforcing the laws of truth, metrons seek out and punish those who use deception to attain wealth, power, or advancement. They target dishonesty in all its forms, including any attempt to change a creature’s true state using magic. As such, beings who exploit or indulge in transmutation magic often incur a visit from a metron…

TACTICS
During Combat A metron first uses dictum or hold monster to immobilize its quarry. Following that, it directly attacks the target of its mission (or accomplishes other objective) in preference to all other creatures.

Morale A metron fights until reduced to fewer than 20 hp. It then flees and attempts to reassess its strategy.

SPECIAL ABILITIES
All-Around Vision (Ex) A metron sees in all directions at once. It cannot be flanked. It gains a +4 racial bonus to Perception.

Prevaricator’s Smite (Su) Any creature within the veil of truth that is under the effect of an transmutation or illusion spell (even though negated), such as invisibility, or attempts to cast such a spell takes a -2 penalty to Reflex saves against the metron’s lightning bolt. In addition, the metron gains a +4 to hit and a +9 on damage on melee attacks against the creature. This effect lasts for 24 hours.

Truespeech (Su) A metron can speak with any creature that has a language as if using a tongues spell (CL 9th). This is always active.

Veil of Truth (Su) A powerful antimagic field surrounds a metron in a 30-ft. radius. This field counters magic effects meant to deceive or alter reality from its original form. All illusion and transmutation spells in the area are dispelled as if affected by an antimagic field (CL 9th).

The metron appears as a 10-ft. tall humanoid composed of steel plates and quietly whirring gears. Four metal wings sprout from its back and a round orb crowns the tip of each wing. These orbs resemble eyes and constantly rotate, scanning the metron’s surroundings. The orbs also emit the metron’s spell-like abilities, but the loss of an orb does not prevent the use of any of these abilities.

A metron’s conviction causes it to generate a constant zone of truth around itself. It can sense a creature’s discomfort in the zone if it attempts to lie, giving the metron an excuse to punish the individual (even though the zone prevents lying.) If the metron suspects the zone is not powerful enough to compel those within it to speak the truth, it employs discern lies.

The metron’s role as the guardian of truth also grants it extensive knowledge of the world. Some metrons gain reputations as not only enforcers but also sages, councilors, and judges. These individuals often act as arbiters in disputes or dispense knowledge and advice to beings likely to advance a metron’s goals or missions.

You can find more of Stefen Styrsky’s take on inevitables in Monster Chronicles: The Inevitable.

2 thoughts on “Metron, Angel of Knowledge and Truth”