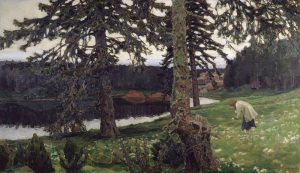 The ancient power of the Old Margreve courses through the veins of a sorcerer with the Margreve bloodline. A distant ancestor may have been a legendary druid, a Margreve hedge witch, a dryad, or even a daughter of Baba Yaga. In time, the sorcerer begins to understand the Margreve and even become part of it…

PCs with the Margreve bloodline who were not raised in the Margreve may not yet realize the source of their power. These include gutter orphans, “wolf children” stolen from the woods and civilized, and children of violators of the Old Ways escaping the wrath of the Margreve in the city.

Bloodline Powers: You can channel the power of the Margreve by calling upon the Old Ways. Over time, this process transforms your mind and body.

Witches’ Hex (Sp)—At 1st level, you can bestow a minor curse on a target with a melee touch attack. The target suffers either a −2 penalty to attack and weapon damage rolls or temporarily loses access to one randomly determined spell or spell-like ability of the highest level they can cast (your choice).

In either case, the condition persists for a number of rounds equal to 1/2 your sorcerer level. Multiple touches do not stack but add to the duration. You can use this ability a number of times per day equal to 3 + your Charisma modifier.

Woodland Stride (Ex)—At 3rd level, you can move through any sort of undergrowth—such as natural thorns, briars, overgrown areas, and similar terrain—at your normal speed and without taking damage or suffering any other impairment. However, thorns, briars, and overgrown areas magically manipulated to impede motion still affect you.

Animal Form (Sp)—At 9th level, you gain the ability to transform yourself into an animal for a number of minutes per day equal to your sorcerer level. This ability functions as beast shape II. The duration need not be consecutive, and you can assume different animal forms at different times (although you may not transform directly from one animal to another).

Siphon Magic (Su)—At 15th level, you can siphon magic used against you. As an immediate action, you may force any creature targeting you with a spell or spell-like ability to make a CL check (DC 10 + your sorcerer level). Failure means all variable numeric spell effects are halved, and the save DC decreases by 2. If the spell affects an area or multiple targets, these modifications only apply to you. You may use the stolen energy to boost the CL of your next spell by 2, if you cast it before the end of your next turn.

Tree Form (Su)—At 20th level, the Margreve accepts you as part of itself, bestowing many plant creature traits on you. You gain immunity to paralysis, poison, polymorph, sleep effects, and stunning.

In addition, no creature of the animal or plant type attacks you within the Margreve unless compelled by magic. You may cast legend lore (1/day) as a spell-like ability using your sorcerer level as your CL.