Skip to content
Home / Delve into the Depths in the Kobold Blog / Making Monsters in Las Vegas: Desiccating Stalker 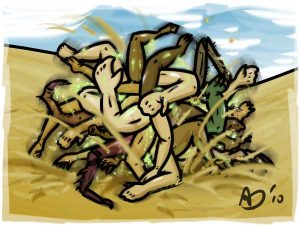 A few weeks ago at NeonCon 2010, I ran a workshop called Monster in an Hour. The plan was to do some crowd-sourced monster design. I wanted participants to think up the things that horrify them not only as a player but also as a person—then we’d build it together.

After talking about the truly monstrous for a few minutes, we decided on the important foundational elements for our critter-to-be (Type, CR, Hit Dice, and size). From there we went down the list, debating attacks, brainstorming abilities, talking over the ecology, so this monster made sense to our deranged minds. In the process, we used my patented Daigle Monstertron 3000 technique and fleshed out this horrible monstrosity for your GMing delight (and for players’ weeping and gnashing of teeth)…

I had a lot of fun and my fellow workshoppers were awesome to work with. Cody, JP, and Matt had great ideas and worked collaboratively as if they’d been doing it for years—as if they were Open Design patrons, even. One of my favorite things about the event was that, even though we each came from different backgrounds and had different games we primarily played, we showed that creativity, collaboration, and good ideas are not the domain of any one particular edition, system, or play style.

I hope you enjoy our creation, and I hope at least one PC dies and the others soil themselves. And GMs… giggle when it happens. Do it for us.

A wad of grasping arms and tangling legs from dozens of different creatures drags itself through the sand, driven only by the need to feed.

A thankfully rare threat in warm and vast deserts, desiccating stalkers thirst for vital fluids and soft tissue, driven only by hunger. Despite being mindless, they prove formidable hunters, lying in wait just beneath the desert’s blistering sands for any sign of movement above. When it senses prey, a desiccating stalker erupts from the ground and grapples its victim with a host of mismatched arms and appendages.

SPECIAL ABILITIES
Siphon Vitals (Ex) A desiccating stalker digests its meals through contact with its gelatinous mass, nestled deep between its grasping limbs. When a desiccating stalker has a grappled opponent in an adjacent square, it can pull it close and begin dissolving and weakening the victim. Each round, the victim suffers 1d3 Str damage and 1d3 Con damage (Fortitude DC 21; Constitution-based).

TRAITS
Appendage Swarm
The stalker takes half damage from melee and ranged attacks.

STANDARD ACTIONS
[M] Double Slam • At-Will
Attack—Melee 2 (one or two creatures); +12 vs. AC.
Hit—3d10+9 damage, and the target is grabbed and pulled 1 square. A maximum of four creatures can be grabbed at a time.

Straddling the line between an undead creature and an ooze, the desiccating stalker is indeed unique. While its most frightful characteristic remains the multitude of appendages of its consumed victims, desiccating stalkers are not animated dead. The limbs incorporated into its bulk protect a rubbery, slimy core mass that is the creature’s true body. As the creature feeds, it draws in its victims centered on the torso and abdomen, so only legs and arms protrude. Because they utilize the appendages of their victims, the creatures are commonly confused with undead.

The true origin of these creatures is unknown; however, one theory proposes the desiccating stalker began as an alien wasting disease that withered its host and dissolved its vital organs into goo. This goo became ambulatory, slithering to safety away from the burning sun in search of life-giving moisture and the creatures that carry moisture in their juicy bodies.

Desiccating stalkers are round to oblong in shape and stretch over 8 ft. across. Dense with moisture, they weigh 700–900 lb. The scent of rotten flesh and pungent water follows them where they hunt.

Desiccating stalkers live in warm deserts and spend most of their time just under the surface to protect themselves from the heat and to prevent moisture loss. These strange creatures sometimes hunt along trade routes and haunt oases, but as vital as an oasis is to desert survival, most desiccating stalkers find themselves at the tip of a protector’s scimitar.

It is rare to find more than one desiccating stalker in the same area at the same time unless the creature recently split.

Find more of Ashton’s art in Paper Miniatures for Tales of the Old Margreve.