Skip to content
Home / Delve into the Depths in the Kobold Blog / Lost City Playtest Preview: The Forbidden Archive 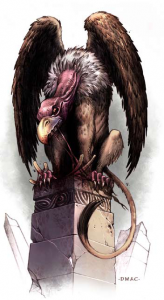 The patrons and designers have completed the first drafts of the The Lost City of Kadralhu patronage project, and now is a great time to jump on if you’re curious but haven’t yet signed up. Today and next week, we present a few pages from Logan Bonner, Michael Furlanetto, Tracy Hurley, and Quinn Murphy. (Our fifth author, Jobe Bittman, just has too many spoilers in his section. Can’t give it all away!)

We tried to choose sections that were as spoiler-free as possible, but if you’re planning on playing this adventure, you should probably not peek.

Next week, we’ll show you the  trignotarb monster entry, themes for the new oklu race, and the section about the tainted plant Malsalix. Now, though, we present part of the location entry for the Forbidden Archive.

Beneath the Corpse Commons lies a strange combination of library, laboratory, and former chapels. Guarded by a deadly trap and imprisoned adversaries of the giants, the Forbidden Archive doesn’t give up its treasures easily… 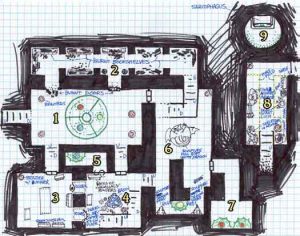 Doors: Except for the burned-down wooden doors off the record rooms, all the doors are stone slabs. The imprisoned kings cannot open these doors but can pass through them once they’re open. Only the door between areas 6 and 7 is locked (requiring a DC 22 Thievery check to open).

Braziers: Everburning braziers, filled with eternal fire from the Elemental Realms, light the archive, filling it with bright light. The braziers in all areas except area 1 have mirrors behind them to reflect their light over the whole room. No braziers light up area 2, although dim light filters in from area 1.

The magic circle in the center of this room serves as a teleportation circle if the adventurers activate the triggers in the three chapels. The sections have symbols: an altar (northwest), a dragon wing (east), and a map (southwest). As the adventurers activate the sigils, the corresponding sections of the magic circle glow. A character who steps into the teleportation circle when it’s active teleports to area 9, the Sanctuary of Sohm Parahni.

All the bound books of records and their wooden shelves have been reduced to ash and charcoal. The King of Avarosh ventured into the record room when left unattended after the death of the giants, struggling against his elemental blood to erase the history of those he hates.

Two shattered glass jars lie near the door of the central room, their wooden stands burnt out from under them. Near each one, a hole no more than 2 inches across pierces the stone floor. The holes resemble a burrow and seems to go down endlessly. A metal plate still attached to the remnants of one stand reads:

TRIGNOTARB
Wonder of Peikadda
A great insect queen births larva that, when introduced to hosts, take their minds from them. For the glory of Kadralhu, we submit these specimens to the Archive.

The wooden tables here are piled with tomes. The ghost giant Andasta had been desperately working on a way to purify the tainted water and end the madness that had overtaken her people. When the adventurers arrive, they’re attacked by the remaining two kings imprisoned in the archive (see Encounter C1: The Two Kings on page XX).

These books might be useful if the adventurers can prevent them from being destroyed during the battle. An adventurer who rescues books might collect one or both of the significant works listed here. Other rescued books might contain a few alchemical formulas or rituals. All the books are written in Giant.

The Waterworks of Kadralhu: This tome describes the basic structure of the sewers and pipes that lead to and from the waterworks (see page XX). Curiously, major portions of the map (such as the location of the vault) were left blank and not addressed in the text. The maps are incredibly inaccurate due to the fall, but adventurers can discern the general direction of places.

Symbology of Kaima: The iconography of the goddess Kaima is described in great detail in this academic work. It’s unconcerned with the facts about the goddess but details how her symbols come in threes—representing life, death, and a third state comparable to hibernation following death. The blood of the goddess was another potent symbol, and flowing water was frequently used as an analog.

The text was fairly recent when Kadralhu fell. It mentions that her image was being removed by giants who had returned to worshiping the primordials.

A rune showing an open eye decorates the northern passageway. See the “Eyes of Divination” sidebar for details.

The Eyes of Divination

Each of the doorways between areas 3 and 4 has a rune and corresponding magical effect that activates only if a creature travels through in a specific direction. A rune of an open eye faces the study above the northern pathway. If a creature moves through that passage from west to east, the scrying…