Skip to content
Home / Delve into the Depths in the Kobold Blog / Loaded Dice: What’s My Motivation? 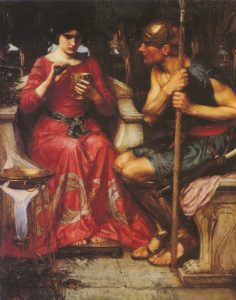 We’ve all been part of one of those games. The kind where characters come together during the goblin raid, where they watch each other’s backs through the tense nights sneaking into the ogre’s cave outside of town, but when it comes time for the next part of the adventure, the party shatters. The rogue steals everything that isn’t nailed down, the barbarian starts attacking anyone who comes within sword’s reach, and the cleric refuses to heal anyone unless they bribe her. What happened? Well, 9 times out of 10 it’s a problem of character motivation.

Character motivation, to put it bluntly, is why characters do what they do. It isn’t enough to simply be a skilled swordsman, a crack rifle shot, or a talented magician. These are skills; they are things a character is capable of. Motivation deals with what characters want, and what drives their actions. It isn’t often covered in character creation, but it’s just as important as min-maxing attributes and feats in the long run.

Let’s take one of the most basic characters you can have: a 1st-level wizard with a specialty as an evoker. The arcane blaster is perhaps the most common spell-slinger one is likely to find on any battle mat ever. Now ask yourself why this character became an evoker, and what he plans to do with this flashy spell set. Is this example wizard small or weak in some way, and so decided to master destructive magic as a way to compensate for a lifetime of being considered frail? If that’s the case, does this wizard tend to throw around power to give the impression that he is dangerous? What would someone with this kind of motivation consider a worthy end for his destructive talents, and the chip on his shoulder?

Now, back up and take it from a different direction. Say that another example wizard comes from a long line of soldiers. Perhaps the wizard decided to learn combat-worthy magic as a way to uphold her family tradition and to do more with a wave of her hand than she could ever do with a sword. If this is the case, then would she seek out glory to enhance her name? Would she treat other party members as subordinates, or would she treat them as comrades-in-arms once they’d faced danger and shed blood together?

This general line of reasoning can be used for any character out there. Look at the skill set these characters have, and ask why they wanted to become what they are. Once a player knows what pushed a character to his or her current state, they then need to ask what the character’s future goals are and why he or she wants them. Does the fighter want to win a reputation and honor so he can woo a noble lady he would otherwise be too lowly to court? Does the barbarian want to find a lost relic from her tribe so that she may return to gain glory from her people? Does the cleric want to heal the sick and comfort the wounded, or is he more interested in moving up to a higher position within the clergy, and thus he takes on dangerous tasks to show he is fit for promotion?

Motivation and the Storyteller

Motivation is not purely a player issue, either. Players need to decide whether their rogue is a greedy locksmith gone bad, a law-abiding trapsmith, or an arrogant burglar looking for a bigger challenge, but it’s the storyteller’s job to weave that motivation into the game.

The storyteller’s responsibility is most clearly seen when mistakes are being made, so here’s an example. It’s the first session, and the party has no connection to one another yet. The characters are a monk with a vow of poverty on a pilgrimage to a sister monastery, a barbarian with an ax to grind who’s on the trail of a particularly fat bounty, a sorceress on her way to the big city to put her talents to work, and a bard who’s singing for her supper. The storyteller arbitrarily decides that all players are at the tavern, and an announcement is made that there are bandits about. A reward has been posted. If that is all the player’s get, then this is going to be a really, really short game. None of the motivations listed were addressed by just throwing a bag of gold into the middle of the table and waiting. With a little bit of work though, this same hook could draw the entire party together into a determined motley willing to work toward a common goal.

For the monk, tell him that the bandits in question sacked the monastery he was traveling to, killed many of the brothers, and made off with prisoners as well as their holy relics. With his destination destroyed and fellow monks in danger, he has significant reason to chase the plot. For the barbarian, have someone name-drop the bounty he’s been seeking, and mention that he’s fallen in with this gang of brigands. Now half the characters have a good reason to go bandit hunting. Mention to the sorceress that the reward has been posted by a nobleman in the city she’s traveling to, and hint that if she were to succeed in the task that it would smooth the path to her finding a patron. For the bard mention there’s enough money to pay her traveling expenses, and that she would be the first to learn and tell a new tale that no other minstrel would have. The chance to be part of a story, and to come out with money in her pockets, might be enough to have her hitting the trail along with the rest of the party in short order.

Motivations change and grow as the characters progress through the story, and the storyteller has to stay on top of them. For instance, if a character meets a goal (say that the fighter was made a lord, and managed to marry that girl of his dreams), what next? If there is nothing to keep a character adventuring, then there’s no reason for that character to remain part of the party. At that point the storyteller has to either concoct a new motivation (the fighter’s wife has been kidnapped, his lands are under siege, he’s been commanded by the king to undertake a new task, and so on), or allow the player to switch characters.

Motivation is what drives the plot. Villains are highly motivated, and the heroes should be no less so. It’s important for storytellers to use the right motivations and to make sure that what a character wants will actually weave the character into the plot as a whole. If not, then the storyteller might need to work with the player to craft a proper motivation that will allow the character to take part in the story.