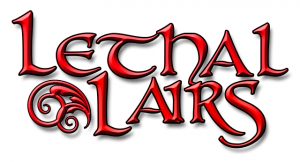 Are you ready to put on your encounter design hat? Would you like to venture into the Southlands to craft your next bit of adventuring fun, then share it with the world?

Using rules for the Pathfinder RPG or 5th edition D&D, design a Southlands encounter named “Red Cliff Raiders”, which uses a theme of desert bandits, and send it to us for judging. We’d also like to see a map about 24 by 36 squares large (this may be embedded in your text file). The maximum length for entries is 1,500 words, and entries must be submitted on or before November 13, 2015, to be eligible. You’ll find the full details in the rules below.

A panel of judges will pick out five finalists to post on the Kobold Press website. Then we’ll ask the public to vote on the entry they think should win the grand prize!

Finalists: a PDF copy of Southlands Bestiary, a Kobold unit patch, and a PDF copy of the Kobold Guide to Combat (retail value approximately $30).

Grand prize: a signed copy of Tyranny of Dragons: Hoard of the Dragon Queen, print and PDF copies of Southlands Bestiary and the Kobold Guide to Combat, a Kobold unit patch, and a contract to publish your entry as part of the upcoming Book of Lairs in 2016 (total retail value approximately $100, not including the publication contract, which is hard to set a value on).

Our talented and experienced panel of judges are as follows: Wolfgang Baur, Dan Dillon, Jon Sawatsky, and Steve Winter.

We cannot wait to see all the Southlands fun you create for all those intrepid adventurers out there! Best of luck to you all—now get started!

By submitting an entry to Kobold Press, you are entering the Kobold Press (the “Sponsor” or “Kobold Press”) Encounters in the Southlands Contest (the “Contest”).

Send an email with your submission to the “Encounters in the Southlands” contest at miranda(at)koboldquarterly(dot)com no later than November 13, 2015.

The submission must take the form of an .rtf, .doc, or .docx attachment. Please remove your name from the submission document.

The email subject line should read Encounters in the Southlands Submission [insert encounter name] in the email’s subject line. Your full name and contact information should be in the body of the email (not in your attachment).

The submission should be no longer than 1,500 words.

3. Dates and Deadlines: Eligible entries must be received no later than 11:59 p.m. Eastern Time on November 13, 2015. Sponsor’s computer is the official time-keeping device for the Contest.

4. Who Will Win: On or about November 23, 2015, five (5) finalists will be selected by the Sponsor from all eligible entries received. All decisions made by Sponsor on all matters relating to the Contest are final and binding. The finalists will be notified on or around November 23, 2015, via the email address provided by entrant at the time of entry. If a winner does not respond to the notification sent to the email address he or she provided after two (2) notifications have been sent by Sponsor, such winner will be disqualified and will forfeit the finalist position. In such event, the finalist position will be awarded to another eligible entrant chosen from the remaining pool of entries in accordance with the terms set forth herein. Finalist prizes will be fulfilled approximately one (1) month after the conclusion of the Contest. The finalists will be announced on the Kobold Press website, and then the voting public will choose an entry from among these five (5) to be the sole winner of the contest’s grand prize. Voting for the grand prize winner will close on or around December 7, 2015.

5. Prize Information and Approximate Retail Value: Five (5) finalists will be awarded a prize pack consisting of the following:

The total finalist prize pack has an estimated value of $30.00

The total grand winner prize pack has an estimated value of $100.00