Skip to content
Home / Delve into the Depths in the Kobold Blog / Kobold Guide to Magic: The Quest for Great Lost Magic 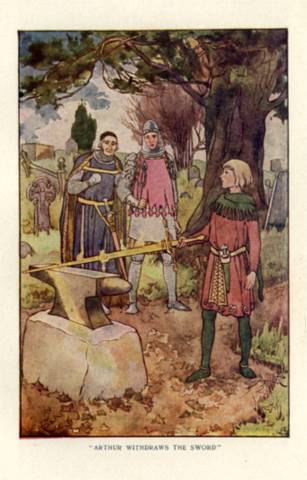 In the divine lore, local folklore, and magical lore of any fantasy setting, it’s important to consider the wording of legends or prophecies. “Whosoever draws this sword from this stone shall henceforth be rightful king of all England” is fine, because it speaks of status, not performance. (History and fiction are both full of “rightful kings” who rule nothing and no one but spend their days shoeing horses or baking bread or shingling cottages, some in ignorance of their heritage, others hiding in fear of losing their heads, and still others shunning a role they don’t want or know they’re horribly suited for.) “Henceforth be rightful king” is just vague enough, and works; “henceforth rule over” is not.

Why? Well, when a roleplaying setting has firm, clear destinies along the lines of “The one who bathes me in the blood of a dragon shall know eternal life, shall smite and throw down all foes, and shall reign in the Castle Tall forevermore,” that setting also has a big problem. If a PC is just following a script (if you do X, then Y shall assuredly follow because the gods, or the hidden gods above the gods, decided as much, eons ago), where’s your heroism? Where are the moral choices that give any life, real or imagined, value? The weight of pride behind stories about “When my character went up against the Great Galadorn Dragon, and slew him”?

Nowhere, that’s where. Free choice and action are gone, predestination governs everything, and heroism is out the window; the best one can hope for is “How much style did you bring to your role, as you followed the script exactly?” The escapism, the fulfillment, the creativity that roleplaying games are supposed to offer—as opposed to other sorts of games defined by long and detailed rules—have been lost and sacrificed.

Of course, none of this stops legends from being exaggerated or out-and-out wrong. Yet it’s so much better when they’re weasel-worded just enough that they seem to imply one thing but promise something different.

“When the unhooded one reigns in Caer Florivel, the dragon lies beheaded on Stone Mountain, and Rorvar Redhanded has won his lady love, then shall fair Poincedonea know a new golden age” is fine. It sets forth three conditions that must come to pass (three quests that don’t sound like they’ll be all that easy, nor alike each other in their achievement), and it proclaims a warm, fuzzy, and vague result. What’s a “new golden age,” exactly? Well, what was the “old golden age” of Poincedonea like? No one can remember or agree? Good! (At least for ongoing roleplaying campaign purposes. If I were writing a novel that ended with the apparent achievement of this “new golden age,” the last paragraph or two would reveal that there were still unfolding problems, and that the unhooded one had vanished from Caer Florivel, and Rorvar quarreled with his lady love, and the onstage characters would look at each other, groan, and say something like “Of course,” or “What else?” or “Somehow, I expected no less.”)

So always leave a little elbow room. Be vague enough to let a new subplot wriggle out.

6 thoughts on “Kobold Guide to Magic: The Quest for Great Lost Magic”