Skip to content
Home / Delve into the Depths in the Kobold Blog / Karesh, Kobold Herald of Tiamut (Part 1) 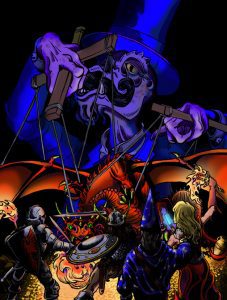 Do you need a recurring villain? Karesh is a nasty little boss that you can use at almost any level of Dungeons & Dragons 4th Edition play.

Early in his career, Karesh leads a typical band of kobolds. His life changes when his band is forced to relocate to a new mountain cave, where their simple excavations reveal the remains of a necromancer’s lair. Karesh is just smart enough—and greedy enough—to decipher much of the necromancer’s writings.

Behaviors: Rub hands together, look around a lot, shift on your feet

Goals: Get out of here alive, with as much necromantic treasure as possible. But with no treasure if necessary.

Dialogue: Karesh is not much for small talk. He can be pushed into uttering villainous monologues, though he will never reveal the location of his home. As the herald of Tiamut, he will speak of her, but he will reveal nothing about her—unless he is cornered. If he’s cornered, he’ll blubber everything.

Trigger: One kobold ally that is within 10 squares of Karesh has been reduced to 0 HP or fewer.

Effect: The kobold ally returns to life with half its bloodied value in hit points.

Effect: Karesh shifts 3 squares, then moves its speed, gaining +4 to all defenses during this movement.