Skip to content
Home / Delve into the Depths in the Kobold Blog / Ask the Kobold: Why Villains Rearrange their Furniture 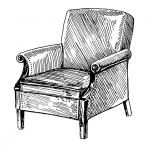 Is it possible to learn enough about a location through a scrying spell so you can teleport there? The combination of scrying and teleporting seems very potent and capable of breaking an adventure. Is there a way to limit this combination of spells without cutting them off completely?

The teleport spell description specifically mentions scrying as a way to get familiar with a teleport destination, so yes, if you get a look at a place through scrying, you can teleport to it.

Getting familiar with an area through scrying spells can involve considerable effort. The clairaudience/clairvoyance spell only lasts one minute per caster level, so you’d need a pile of spells to make a study. Even worse, you must already know about a place to use the spell. That is, you must have seen it before, been there, or surmise exactly where it is. For example, you can peek into a throne room with clairaudience/clairvoyance spell if you’ve been there before or if you can figure out where it lies.

To figure out where it lies if you haven’t been there, you need some clue about the location. If you’re standing outside the door, it’s a fairly simply matter to look beyond the door. If you’re outside the building, but can see the building, you might be able to guess the throne room’s general location by looking at doors, windows, and other architectural details in the building. Then again, in a large or unusual building you might need help from someone who has been there — perhaps you could bribe a servant — to nail down the location clearly enough to use clairaudience/clairvoyance.

If you can’t get a look at the building where the throne room you and to see lies and you haven’t been there or seen it before, you’ll need a fairly detailed description of exactly where the throne room is before you can use clairaudience/clairvoyance in there. You’d have to have the place’s location described well enough that you could find the place on your own without any additional direction. The farther away you get (and the less well known the place is) the less likely you’ll be able to get such a description.

A scrying spell is easier to use, but keep in mind that you must scry a creature, not a location. If your subject makes a successful save against the spell, your attempt fails and you can’t try to scry your subject again for 24 hours.

If you successfully scry on someone, you can see an area 10 feet in all directions from your subject, but there’s no guarantee the subject will be in the place you want to reach with a teleport. Also, the spell’s censor follows your subject. If your subject is moving around, it can take quite some time for you to make a thorough study of a place using a scrying spell.

Possible countermeasures against teleportation and scrying are legion. Just rearranging the furnishings in a room can make the place somewhat unfamiliar to teleporting visitors. Lead sheeting in a room’s walls, floor, and ceiling prevents scrying.

Also, any spell from the scrying subschool creates an invisible sensor that smart creatures can nevertheless detect. A DC 20 Intelligence check reveals the sensor. I recommend making the check the first time a creature gets close enough to the sensor (or vice versa) to be seen by the scrying spell caster.

When someone detects a sensor, it’s a good bet the character takes some action in response. The character might douse the lights, scurry to some enclosed space where the viewer won’t learn anything and would be trapped when teleporting to the locale (shutting oneself in a closet, for example), dousing the lights, putting up some kind of opaque barrier (such as a blanket or curtain), or even casting dispel magic.

There are a variety of spells, too, that defeat scrying and teleportation. Against scrying, it’s hard to beat nondetection, though its protection is only temporary. Against teleportation, forbiddance locks out an area permanently, but that area is fairly small and it can interfere with legitimate residents.

As we sit in our homes and offices, with the comforts of our technological society all around, it’s often hard to grasp just how characters in a fantasy world, where magic rules and technology has to play catch-up, live and think.

While characters living in a game world don’t have access to rulebooks, it’s a good bet that any character with a modicum of Intelligence, education, and common sense has at least a general idea of what magic can do and how to guard against it. The situation, it seems to me, is similar to computer users dealing with viruses and malware. We’re all aware these things exist, and most of us take at least basic precautions against them (and some of us do nothing, more’s the pity). So, most sensible characters know about teleportation and scrying spells.

I think it’s reasonable to assume that any middle- or upper-class dwelling or business probably has at least one area protected against scrying by lead sheeting. The same goes for most military installations. Of course, not everyone who lives and works in such a place can stay in the protected area all the time. Characters planning something special might take steps to widen the protected area or to obtain some portable protection, such as nondetection spells. Or simply wearing a disguise to become a little hard to find.

Teleportation is harder to guard against. As noted earlier, forbiddance spell offers a fairly easy and permanent solution, at least for a limited area (one 60-foot cube per caster level). Though its also expensive (1,500 gp plus 1,500 gp per 60-foot cube). Forbiddance also locks out folks of differing alignments, which makes it less than practical in many cases.

Still, a smart person can take some everyday precautions against teleporting invaders. As noted earlier, just rearranging the furniture from time to time can throw off a teleport spell. If you have some muscle available you can pick up and move things between rooms wholesale. For example, emptying out a living area and filling it with bulk supplies. That might be enough to force a teleporting invader to deal with a false location (see the teleport spell description).

Beyond that, the smart character keeps some friends (or paid guards) close at hand and keeps a low profile. When foes can just appear out of thin air (and in the blink of an eye), it’s best to conceal the details of your living arrangements from all but your most trusted comrades (how many folks really need to know what your bedchamber really looks like). If you have someone to clean your room and make your bed, it’s best to keep that person under wraps. Such a person might be treated as a pampered favorite or as a virtual prisoner.

When you have something important going on, you can use temporary magical countermeasures, such as dimensional lock and nondetection. Since these spells don’t last all day, you’d need to choose the periods when you’re protected carefully, and stay somewhere safe when the spells end.

Got a question or topic for Skip Williams? Let us know, and we’ll ask the Kobold.

2 thoughts on “Ask the Kobold: <br />Why Villains Rearrange their Furniture”