Skip to content
Home / Delve into the Depths in the Kobold Blog / Midgard Icons: The Dragon Sultan 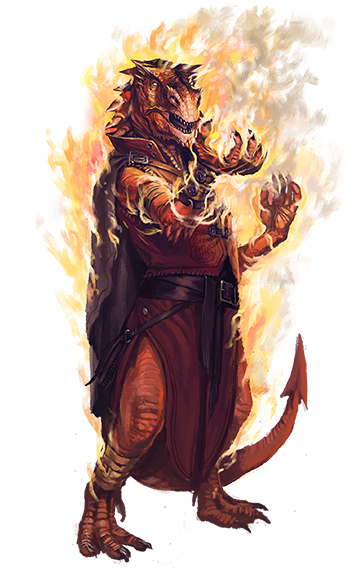 Now, let’s look in more detail at the third of the 13 Midgard icons: Ozmir Al-Stragul, the Dragon Sultan!

There’s an overview of the 13 Midgard icons here along with icon relationship mechanics you can use to connect player characters with their world more powerfully in D&D, Pathfinder, and many other RPGs.

The scarred and cunning dragonkin ruler of the Mharoti Empire, Dread Sultan Ozmir Al-Stragul, is a general of great skill and a politician of utter ruthlessness.

“We accept your surrender. Swear fealty to the Scaled Lords, and peace and prosperity shall be yours as vassals of the Mharoti Empire. Refuse, and we will grant you a swift death.”

In the Golden City of Harkesh at the Imperial Palace of the Eight Elements.

The vastly powerful Mharoti Empire was founded by dragons and is run by dragons for their enrichment. It is one of the few places where humans and their kin are distinctly second-class citizens, though there is one notable exception: the dragons choose not to appoint one of their own to rule the empire. Their vanity was such that they could never agree on a dragon ruler, so they gave the job to a clearly inferior species instead. The empire is ruled by a human or dragonkin sultan or sultana who loosely holds the reins of power.

On a day-to-day level, the Dread Sultan Ozmir Al-Stragul administers the executive office of the Mharoti compact: appointing judges and decreeing laws, bestowing and stripping titles from the nobility, and granting land and privileges to the morza, a term translated from the Draconic as “prince” or “dragon governor” or “great lord.” He collects the taxes, distributes bread and tribute, raises and leads the armies (or chooses the general who does), and makes everyone cooperate. His harem assassins threaten dragonkin and human satraps who fail to toe the line. His command of the armies gives him leverage against any individual great lord, though the morza remain independent powers to a large degree.

Most of all, the sultan looks out for the empire as a whole. If he didn’t exist, the empire would not be an empire—it would more closely resemble eight draconic kingdoms at war.

Adventurers may be recruited by the Dragon Sultan or his organization to help resolve issues of nesting rituals, peculiar forms of status or insult, or assassination of seemingly inconsequential personages—or they may become embroiled at the highest levels in court intrigue or even a naked power grab.

The Dragon Sultan does not trust Baba Yaga in the least, but she has proven a valuable source of information and counsel. He seeks to forge good relations with the Queen of Night and Magic and the Queen of the Road, seeking new opportunities for trade and diplomacy throughout Midgard as well as realms beyond.

The Dragon Sultan’s aggressive expansion of the Mharoti Empire began with the conquest and subjugation of Illyria, one of the Seven Cities. As a result, the Oracle of Kammae and First Duke-Admiral Cadua of Triolo consider the Dragon Sultan the chief threat to their city-states and engage in violent skirmishes and privateering against Mharoti vessels.

Ozmir Al-Stragul deposed the young human Sultana Casmara Azrabahir after her armies lost the Battle of Wheeling Angels in the Eastern deserts and her fleet sank under the combined power of the Seven Cities in the Battle of the Ragusa Narrows. The empire convulsed with the death of tens of thousands and the annihilation of an entire legion in the east. The sultana’s elite palace guards—the Order of the Wyvern—fell quickly in line with the new sultan. The sultana herself barely escaped the coup, fleeing on dragonback into exile in the Seven Cities.

Dread Sultan Al-Stragul has a great deal of power but only because the governors don’t trust any of their own number with that much authority. Yet he seems able to plan effectively and to command the morza and the imperial legions: indeed, his rule depends on turning military failure into conquest, and he has shown the ruthlessness needed to grind Illyria’s resistance into the dust, conquering a new province and proving the blessing of the dragon gods upon his authority.

Everything will be all right as long as the Dragon Sultan cannot achieve his goal of conquering Nuria Natal and plundering its ancient secrets.