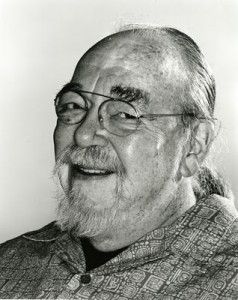 In his My First Gen Con post, Colin McComb cryptically hinted at a secret assignment to spy on Gary Gygax. At last, the truth can be told…

In early August of 1992, I was summoned to the executive area of TSR. I was constantly concerned about my job (a quirk that would lead to a memorable April Fool’s joke a year or two later), and to be summoned to the executive area generally meant bad things were about to happen. I arrived in a superior’s office, and an even-more superior person was in there as well. They told me to shut the door.

They explained to me that Gary Gygax—one of the creators of Dungeons & Dragons, the preeminent pioneer of the industry, the ousted owner of the company—was going to demo a game at Gen Con. That game was originally called… Dangerous Dimensions! DD! Like… Dungeons & Dragons! Clearly, went the thinking in Executive Land, even though the name had been changed to Dangerous Journeys, this meant that Gygax was trying to cash in on TSR’s intellectual property. They wanted to stop him in his tracks.

They selected me, they said, because I was still young and didn’t know a lot of people in the industry. I could get close to Gygax, watch him demo his game, attend his lectures, and I’d look like any other fan. But I had a secret: I would wait for him to slip up and start talking about his game in terms of Dungeons & Dragons, and then TSR could totally drive him out of business for good! They presented me with a fake Gen Con badge with a non-descript name, slotted out some time for me in my Gen Con schedule, and that was it. I was a spy.

I didn’t feel good about this. But hell, I had dreamed of being a game designer since I knew that such a job existed. Working at TSR was heaven. And all of this, they suggested without saying so, might disappear if I said no.

So I went to Gen Con. I worked my schedule. And when the time came, I slipped into the bathroom, changed my shirt and my badge, and ambled over to where Gary was demoing Dangerous Journeys.

It wasn’t crowded there. A few people stood around, playing the game. When I stood at their periphery, Gary Gygax looked up… looked me right in the eye… and said, “Do you want to learn how to play?”

Imagine that. The founder of the industry, the guy who wrote some of the most important books in my life, the man whose name nailed down certainties in the games I had spent years playing, and he wants to teach me how to play his game. But instead of jumping in with delight, I’m standing there with snakes coiling in my gut, a traitor, as the man who made my dreams possible kindly opens the door to someone who might destroy him.

“No,” I said, “I’ll just watch.” And I stood and watched as Gary Gygax taught some other lucky bastards how to play his game.

I went to his seminar the next day and listened to him talk to a half-full room of people about his new game, and I realized that even if he said that his game was going to replace Dungeons & Dragons and that everyone should go burn down the TSR castle in the Exhibit Hall, I would never report that back. Never.

At the debriefing, they asked me what he’d said.

Colin McComb won two Origins Awards for his work with Second Edition Dungeons & Dragons, worked extensively on the Planescape line, and helped create the campaign setting of Birthright. He left TSR to work at Interplay/Black Isle Studios, where he helped design the cult classic computer RPG Planescape: Torment, the post-apocalyptic classic Fallout 2, and other games. Since then, he has worked with a variety of companies including Paizo, Malhavoc Press, and Planetwide Games, and is a co-owner of 3lb Games where he creates mobile applications for kids. Colin contributed his insights and expertise to the Kobold Guide to Game Design Vol. III: Tools & Techniques.