Skip to content
Home / Delve into the Depths in the Kobold Blog / Humpday Hazard: Ghoul Vomit 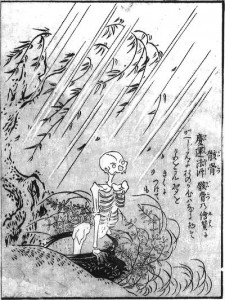 The priest sat in silence, casting a long frown over the ninth bowl of oatmeal the warrior had ignored this week.

“When it first touched my ears, it sounded like a barrel of rancid meat was being dumped on a cellar floor all at once. I could hear chunks of wet skin sliding on the ground, settling in cracks between the masonry.” He stopped, licked his teeth, and loosed a hoarse cough. The priest offered a bowl of water to the man, but he refused…

“I opened the door, just a finger’s width, and looked through. It was hideous. Damned, damned hideous.”

A candle sputtered. The wind-stripped bushes outside the monastery clawed at the colored windows.

“Those things—ghouls they call ’em—they were all standing in a circle. They were hunched over, heaving. The stench overpowered me. I watched while they groaned at each other, stopping only to let mounds of pale flesh burst from their mouths. I could hear it rushing through their throats, the meat pressing against their insides like hands on a sheet hung out to dry. Strings of black muscle dangled from their horrible, horrible crooked jaws after each go.”

The priest clutched the holy symbol beneath his cloak.

The fighter managed a scowl.

Necromancers and other scholars of the walking dead learn a peculiar fact about their subjects early in their studies.

Because they lack the ability to digest what they eat, zombies and other undead that consume the living inevitably burst. The dead flesh inside of them rots for weeks, bloating until the pressure rends open the creature from within. While rarely dangerous, living creatures that witness such an occurrence describe it as “singularly horrific.”

There is a notable exception to this phenomenon, however. For reasons that elude even the most learned practitioners of the dark arts, ghouls posses a unique reflex that permits them to expel putrefied meat from their insides by vomiting. The leavings of such an act—pools of clotted bile flecked with bits of flesh and bone—serve as an ominous warning for those foolish enough to stumble into places where the living are not welcome.

Shreds of bloated flesh quiver amid a spatter of hissing bile.

Hazard A 3-by-3 square area of floor is covered in ghoul vomit, which impedes movement and leaves a nauseating stench on those who come into contact with it

No check is needed to notice a patch of ghoul vomit; living creatures within 20 squares detect the hazard’s odor

Trigger When a creature enters or starts its turn in the hazard’s area of effect, it attacks

Attack
No Action           Melee
0
Target
The triggering creature
Attack
Level + 3 vs. Reflex
Hit Normal low acid damage by level, and the target is knocked prone; in addition, the ghoul vomit makes a secondary attack against the target:

Secondary Attack Level + 1 vs. Fortitude
Hit The target contracts ghoul stench; while affected, the target and any adjacent living creature take a -1 penalty to Endurance checks, Heal checks, and Fortitude defense per tier; the stench lasts until the target spends a short rest bathing in hot water and tomato paste

Countermeasures
◊ With an Acrobatics check (DC 10 + 1/2 hazard level) and a move action, you can move into a square covered in ghoul vomit without risk of falling; if the check fails or you move more than 1 square, the hazard attacks.

◊ Non-living creatures or creatures that cannot smell are not subject to the ghoul stench’s penalties.

◊ Eladrin and elves gain a +5 bonus to Fortitude against attacks made by the hazard. Half-elves gain a +2 bonus.

◊ Casting the Remove Affliction ritual on a creature affected by the ghoul stench ends the effect.

As ghoul vomit is harmful to living creatures, they rarely exploit it in the construction of traps.

Intelligent undead, on the other hand, find ghoul vomit to be an invaluable resource for both arcane research and stronghold defense. Highly acidic and dripping with necrotic slime, liches and other necromancers often use ghoul vomit as a catalyst in foul potions and potent elixirs. Undead dungeon lords might also hang censers filled with ghoul vomit throughout their lair to weaken or drive off intruders (aura 2, creatures entering or starting their turn in the aura take a -2 penalty to Fortitude until the start of their next turn).

Phryaxis, a lich infamous for the life-draining rituals she unleashed upon the plane, is said to have erected a vomitorium in which her legion of ghoul servants could regurgitate adventurers devoured in her tomb.

The vault of the Iron Lich, a demilich adept in the building of constructs, is guarded by an iron golem capable of spraying jets of ghoul vomit. The following power replaces the iron golem’s breath weapon power.

Ghoul Vomit Spray (standard; recharge on 6) ◊ Acid, Necrotic
Close blast 3; +25 vs. Fortitude; 2d8+6 acid damage, and the target is knocked prone and contracts ghoul stench (see above); in addition, all squares in the blast are treated as difficult terrain until the start of the iron golem’s next turn