Skip to content
Home / Delve into the Depths in the Kobold Blog / Hump Day Hazard: Vestige of Apathy 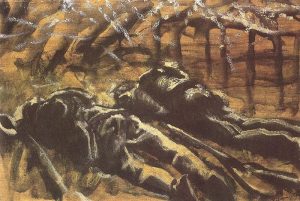 The life of an adventurer is one of unrelenting struggle and limitless sacrifice. To carry sword and symbol, without hesitation, into darkened labyrinths and abysmal grottoes betrays a resolve uncommon for mortals. Vicious monsters, lethal traps, insurmountable hazards—an adventurer must not waver in the face of such peril.

And yet, many do. Like the soldier who marches to campaign, honor and victory are tempered—if not occluded—by risk, fatigue, disease, hopelessness, and death. Those that succumb to despair often flee back to the safety of civilization, their arms and implements relegated to mere wall decoration…

Others are not so blessed with the option to turn around. Perhaps they have journeyed into lands and planes far from home, or it may be that the quest at hand is too crucial to abandon. These unfortunate souls slog onward, harboring resentment and unconcern until, ultimately, languor takes hold.

Adventurers that die in the midst of extreme apathy rot with preternatural quickness, leaving only a pile of bones that collect dust and mold. Color soon drains from the area in which the champion fell, and the remains exude an aura of apathy that drives even the most resolute warrior to indifference. This haunted dungeon hazard is known as a vestige of apathy.

An aura of indifference saps your motivation, making the task at hand seem like an exercise in futility.

Hazard A 3-square aura of colorless gloom emanates from a skeletal corpse, filling nearby creatures with supernatural apathy and sluggishness

Trigger When a living creature enters or starts its turn in the aura, the vestige of apathy attacks

Attack
Opportunity Action           Close burst 3
Target The triggering creature
Attack Level + 5 vs. Will
Hit Normal moderate psychic and necrotic damage by level plus ongoing 5 (per tier) psychic damage, and the target is dazed and slowed (save ends all); if the target is bloodied or reduced to 0 hp by the vestige of apathy, it contracts deathborne languor (see below)
Aftereffect—The target cannot spend action points (save ends)

Countermeasures
◊ You can dismiss the vestige of apathy for 1 round, when adjacent to the hazard’s focus, with a standard action and a DC 22 + 1/2 level Religion check

◊ You can make a DC 17 + 1/2 level Diplomacy or DC 22 + 1/2 level Intimidate check, when adjacent to a creature affected by the hazard, as a standard action to grant that creature a saving throw against its effect

A vestige of apathy haunts the corridors of especially dangerous or oppressive dungeons. Most creatures—including monsters—avoid this hazard, and none are known to have exploited it as part of a trap.

With the exception of the aura of colorlessness that surrounds it, a vestige of apathy appears as an unremarkable skeleton. A character casting the Speak with Dead or Last Sight Vision ritual on a vestige of apathy is overcome with premonitions that drain his or her morale (level + 5 vs. Will). On a hit, the target contracts deathborne languor (see below).

Creatures suffering from deathborne languor slip further and further into apathy with each passing night, their willingness to adventure giving way to the desire for solitude and sleep. If left untreated, a creature with the disease comes to see life itself as futile and refuses to eat.

I was gonna tell a joke, but… oh, nevermind. I’m too depressed.

Tell us something. Or don’t. The cake is a lie anyway.