Skip to content
Home / Delve into the Depths in the Kobold Blog / Monster Monday: Antisoul 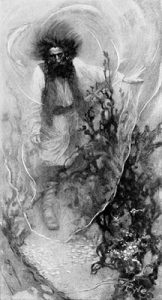 The malevolent entity soared above the dead body while black tendrils played across the corpse, arcing like ebon lightning every few seconds.

And now a cacophonous scream erupts from the vile form as it surges forward — toward you!

Antisouls, so named by a young priest who was the only surviving member of a group of travelers that fell to one such creature, are entities of pure negative energy that normally exist only on the plane of negative energy. Sometimes, however, a conflux of events can open a gateway and tempt these creatures to visit other planes of existence. One such conflux occurs when powerful divine magic attempts to restore life to a dead creature, and the person refuses to grasp at this new chance at life. This rejection echoes across the planes of existence, providing an opportunity for an “antisoul” to notice it, then follow it back to the pathway created by the spell. After it comes through to where the corpse of the intended recipient of the divine magic rests, it seeks to cause as much destruction as possible. Read more about this creature — maybe it’ll show up on your character’s doorstep this evening and ask for more than a treat!

SPECIAL ABILITIES
Death Amplification (Su) Antisouls can amplify the death of a living being. If a creature dies within 30 ft. of an antisoul, it can cause a negative energy explosion with a radius of 10 feet that is centered on one of the dead creature’s squares. This explosion does 1d6 damage per HD of the creature that died to a maximum of 15d6 (Reflex DC 23 for half). An antisoul may use this ability only once per round.

Lifesense (Su) An antisoul notices and locates living creatures within 60 feet, just as if it possessed the blindsight ability.

Negative Energy Aura (Su) An antisoul is surrounded by an aura of negative energy. Creatures within 5 ft. of it take 1d6 negative energy damage at the beginning of the antisoul’s turn.

Vulnerability to Positive Energy (Ex) An antisoul can be harmed by positive energy effects that would harm an undead creature. In addition, an antisoul takes half again as much damage (+50%) from such effects.

When manifested on other planes, antisouls take on a warped version of the appearance of the person who was supposed to be brought back to life. Their features twist and elongate, and their eyes become completely black. Negative energy ripples around the antisoul and plays across its body like constantly discharging electricity.

Antisouls are alien entities whose usual existence is almost akin to a perpetual hibernation. They are sometimes reached by magic users using divination magic to contact the negative energy plane, but otherwise they have little to no contact with others. When they do use a rejected life-restoring spell as a pathway to other planes, they have little purpose other than to destroy as much life as possible. Luckily for those who are around when they arrive, the rare rampages of antisouls are most often begun in the presence of powerful clerics who are often the people best equipped to end them.

As “living” negative energy, antisouls are forces of entropy, and they try to bring as much death to the world as possible. It should be noted, though, that they are not mindless. Antisouls can use their lifesense and deathwatch abilities to choose targets closest to death to eliminate as many lives as possible with their death amplification ability. Regardless of relative hit point totals, though, antisouls try to eliminate any obvious divine casters as quickly as possible.