Skip to content
Home / Delve into the Depths in the Kobold Blog / Howling Tower: World of Wonder 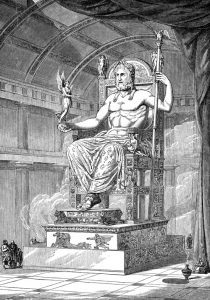 Ask anyone who knows me, and they’ll tell you that I’m definitely not a reactionary type. I consider myself to be progressive about most things. But in some regards, I’m an unapologetic originalist. I almost always prefer the first recording of a song to the cover version, the original version of a movie to the remake, authentic ethnic food to an anglicized, family restaurant dish, and charcoal over propane. Knowing that, it should come as no surprise that I’m not entirely sold on the whole theory of progress idea. Looking at the ancient world, one has to wonder whether we’ve really come as far as we like to think we have. Sure, modern medicine with penicillin and vaccinations is great, and it’s tough to imagine life without the Internet anymore even though it’s been around for less than half of my lifetime.

But ask yourself, what does the 21st Century offer to rival the seven wonders of the ancient world?

The American Society of Civil Engineers has a list of modern engineering wonders and, make no mistake, it’s impressive. Yet I can’t escape the nagging feeling that our steel mills, steam-driven excavators, tower cranes, and computer-aided structural analysis constitute cheating on some level.

The question is not whether we could re-master the 3rd Century B.C. technology that built the Colossus of Rhodes the first time around. I’m sure we could. The question is whether we’d have the stomach for it. Could we muster the political and economic fortitude to spend 40 years piling behemoth stones with our backs and our hands until they made a pyramid that would last 5,000 years?

To my mind, at least, the ancient world’s monuments of bronze and stone have a magnificence that can’t be matched by modern constructions of steel and concrete, no matter how high we pile them up. Maybe that’s because a part of me can still imagine gazing at the Temple of Artemis or the Statue of Zeus, with little knowledge of machines beyond the lever and the ramp, and wondering with amazement, “How did they do it?”

We humans are the only creatures on this planet with the drive to build monuments, and that drive seems to be universal among us. Some element in our nature pushes us to make things that are taller, wider, more permanent, and more beautiful than anything has ever been before. Is it because we just can’t get enough of those opposable thumbs? To impress the hairy monkeys with our big brains? To reassure ourselves that we are masters of the universe? Or do we build monuments because we are the only creatures who foresee our own deaths?

One thing is certain. If elves, dwarves, halflings, dragonborn, giants, Klingons, droyne, and badders share that spark of essential humanness, then they, too, will build monuments. With the aid of magic, mutations, and antigravity tech, their marvels might well put ours to shame.

What’s vital in your fictional universe is that the sense of wonder isn’t made humdrum by magic and technology. If the Burj Khalifa seems less impressive to you than the Lighthouse of Alexandria, then you know what I’m talking about.

Monuments inspire awe because of what they convey about the human spirit. They measure the limit of what humans can achieve. If magic or technology reduces the question of what’s possible to a question of return-on-investment, then the impossible task becomes finding a way to stir feelings of true wonder in readers and players.