Skip to content
Home / Delve into the Depths in the Kobold Blog / Howling Tower: So You’re a Noob 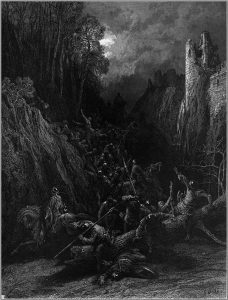 Welcome to the end of the Howling Tower hiatus—thanks for coming! The Tower has been silent for too long. During the past year, I’ve been so occupied with huge writing projects that no time or energy was left over for small ones. Lots of good things came out of the past year — Hoard of the Dragon Queen and The Rise of Tiamat for Kobold Press, and a trio of Fifth Edition books published by Necromancer Games: Fifth Edition Foes, Lost Spells, and Quests of Doom. But now that those massive projects are wrapped up, the light is flickering again atop the creepy tower at the dismal end of the valley, and eerie wailing can be heard wafting through the pre-dawn mist again.

This six-part series of columns will be aimed squarely at RPG players instead of GMs. Gamemasters have reams of material to peruse when they want advice on how to do their jobs better, but the pickings can be slim where players are concerned. The goal is to help readers develop better roleplaying habits and attitudes so they can get the most enjoyment from their time around the game table.

Just because the advice is aimed at the players’ side of the screen doesn’t mean GMs should look away. They’re sure to find some useful tidbits here, too. You can’t be a good GM without understanding where your players are coming from.

Most of what we’ll cover can be summed up succinctly in two words: embrace immersion. The more you suspend disbelief and think like a character instead of like a player, the richer your experience becomes. That little gem of an idea has many facets to explore.

The rest of this first installment is meant specifically for new players. Offering advice to new players in this venue presents a small problem: inexperienced players probably aren’t reading this column. Fortunately, RPGs are social games played with friends. If you have a new player in your group, or if you know someone who’s thinking about dipping a toe into the water of RPGs, send them a link. That’s how casual and one-time players get turned into regulars.

The first maxim for new players is also the hardest one to follow, even for experienced players: be clear about what you want.

RPGs come in a huge variety of flavors that appeal to different tastes. There are fantasy RPGs about dragons and wizards, gritty crime RPGs about private eyes and sharp-eyed news reporters, Western RPGs about cowboys and gunslingers, steampunk RPGs about Victorian scientists and explorers, horror RPGs about occultists and secret societies, and science fiction RPGs about interstellar rogues with blasters and fast starships—but also science fiction RPGs about giant robots fighting corporate wars, or computer hackers fighting interdimensional invaders, or wily mutants with mental powers evading the thought police. Genre matters; it’s the #1 factor that can pull you into a game or push you out, so look around for a genre that really flips your switch.

This maxim has a second aspect that’s just as important but much harder to see. That’s the tone of the game—how it’s meant to be played. One science fiction game about giant robots might be gritty and technical, with lots of math involved in designing and building your giant robot. On the other hand, you might find a game that looks similar but pushes the math and engineering to the background and instead takes a light, storytelling approach to giant, flying, rocket-launching robots fighting enormous, building-stomping monsters. The packages and websites for those two games might look very similar, but the experience of playing them will be entirely different. If you sit down expecting to play one type of game and wind up playing the other, it could turn out to be a very long night.

The main thing is simply to be aware that all sorts of RPGs exist. If you try one and it doesn’t grab you, don’t give up on RPGs or even on that genre. So many games are available to choose from that one can be found to fit any preference. Talk to your friends and other roleplayers, keep your eyes open, and you’ll find a flavor that suits your taste.

After you find a game that grabs and holds your interest, don’t sweat the rules. The absolute, #1, can’t-do-better-than-this method to learn the rules to any RPG is to sit down and play. Every RPG, boiled down to its essence, involves a gamemaster describing a problem to the players, and the players describing how they solve it. Rules come up and affect that give-and-take, but you don’t need to know the rules to participate in solving the problem. You can learn them on the fly, in a process like on-the-job training. When the time comes that you need to interact with the rules—usually that’s when dice need to be rolled—someone will hand you the dice and tell you what to do. Until then, put the rules out of your mind. Don’t even think about them. You’re an imaginary character facing a problem; focus your attention on that, and everything else will happen naturally.

My last piece of advice to new players might seem shocking (even to experienced players), but it’s important. Sometime in your first or second RPG session, get your character killed.

This is good advice for two reasons.

First, your first RPG character is an experiment and a learning experience. You don’t yet know enough about the game, the rules, or the world to reliably create the best character for you to play. The odds are very low that this first character will be a perfect fit. Killing off that character is a perfect opportunity to take what you learned from those first experiences—about the rules, the setting, the other players, and yourself—and roll it into a new character that’s closer to what you really want.

Second, too many players are afraid to lose a character. You don’t need that phobia. Generating a character takes time and effort, and players develop sentimental attachments to their creations. But RPG characters face danger constantly, and sometimes they don’t survive. Losing a character is part of the game. It shouldn’t be traumatic or frightening. It can actually be uplifting, in the right circumstances. As with everything else, the best way to learn how to deal with character death is to try it with a character that’s largely disposable anyway.

So take the plunge. You can make that first character’s death heroic, tragic, funny, memorable, or anything else. It can even be motivational, if you use it as an element in your next character’s history (“Ragnar took up the sword when news reached the fjord that his cousin Rolf had been killed by gnolls”). You’ll learn that losing a character is nothing to fear, and a “good death” can add a lot to the roleplaying experience.

3 thoughts on “Howling Tower: So You’re a Noob”