Skip to content
Home / Delve into the Depths in the Kobold Blog / From Diablo 3 to D&D: Treasure Pygmies 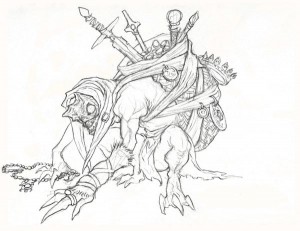 Welcome to the second installment in Jerry’s Diablo 3 to D&D series of blog posts. You can read about skill runes first, if you want, or dive right into this week’s topic: treasure pygmies.

Ah, treasure pygmies. Here’s another bit of Diablo 3 that any fun-loving group of gamers should readily enjoy at their tables. Inserting a treasure pygmy into your game should be effortless, provided you have ample means of whipping up a stat block for one. So, what is a treasure pygmy? Well, it’s basically exactly what it sounds like . . . and a lot more.

A treasure pygmy is a small impish creature. They have often been referred to as being a treasure goblin, but it is unclear what species of creature they actually are. They have a wide range of skin colors but are typically green-brown with golden tones and highlights that give off a faint glow. Large eyes that shine with the reflectiveness of polished obsidian dominate their oversized heads. Large and somewhat conical ears flank their batlike facial features and serve as their first and primary detection method for escaping capture or harm.

These creatures primarily show up in places riddled with treasure, namely dungeons, but any other place that harbors riches is prime territory for them. They prefer to inhabit dungeons that already serve as a home to many other denizens, mostly because of a thirst for pandemonium, but also because these locations have the promise of additional targets from which to procure treasure. These creatures have never been encountered in a place where treasure was merely a rumor.

Because so little is known of them, it is hard to decipher much about their origins. They have never been seen eating, resting, or communicating with other creatures. Additionally, a treasure pygmy has never been seen in the company of other treasure pygmies. Because of this, some people believe that only one treasure pygmy exists, and they state that anyone who has claimed to have bested one was either subject to an elaborate illusion, or is simply a liar.

Treasure pygmies leave only two things behind them as they scurry off and away from pursuers: childish laughter and a breadcrumb trail of gold and gems.

When they see adventurers or any other creature intelligent or resourceful enough to covet the wealth they carry, treasure pygmies immediately flee. It is not known if they do this out of fear or because they revel in the mischief of teasing those who would attempt to claim their valuables. The latter guess is perhaps the best one, since any creature that carries ludicrous treasure hoards within bags of holding that are twice the size of its own body is likely to be one that is very unfamiliar with dread.

There’s not much to be said about combat with these creatures, since they do not fight at all. A pygmy will run for its life with zero reservations for creating additional chaos in its wake. If these creatures have a strategy at all, it is to duck and weave through every obstacle and hostile creature around so that they can make things all that much more difficult for anyone trying to pursue them.

When the pygmy has gained enough distance from its enemies and the moment is right, a series of spastic hand gestures serves to conjure a portal back into what is presumed to be the only means of entry into their domain. No known mortal, immortal, or otherwise has been known to have ever entered one of these gateways. The portals shimmer with golden green light, and they produce a sound described as being similar to the inverse crackling of flames. Within the centers of the portals, seas of riches beyond measure can be seen, and every now and then, the face of a grinning eyeless demon known as Greed appears.

The Domain of Greed

Believed to be the embodiment of hedonism, deviltry, and covetousness, Greed is often referred to as a demon by humanity, and he is believed to dwell within the hells or the abyss. Some of the elder races believe Greed to be a much older and much more intangible entity. Elves think that Greed is an extraplanar being that dwells within a pocket of the material world, tempting their people with power and riches. Dwarves believe Greed to be an old wives’ tale that was dreamed up by their elders to ward others off from plundering their craft halls and gilded tombs. Some gnomes regard Greed as being a more benevolent spirit and they revel in all of the shiny bits and baubles associated with his realm.

It is still unclear as to whether the pygmies serve Greed, or he serves them. The droves of treasure they constantly steal and haul back to their domain could be offerings, or they might be resources that Greed uses for some mysterious purposes of his own. Perhaps no one will ever find out, but anything is possible. One thing is for certain: Greed’s realm is surely a vast treasure hoard, and if anyone traverses it and comes out alive with even a fraction of the hoard, he or she might very well be the richest person to have ever lived.

A Few Shiny Hooks Before I Leave

If you want to add the mysterious treasure pygmy to your games, try a few of these juicy bits to lead your players in the right direction:

In our next installment of D3 & D&D, I’ll be exploring weapons, gear, and other ways to protect an adventurer’s hide. Socketed items, the trinkets that go inside them, and precious gems that warrant much more than just gold will be the topic of discussion. See you then!

3 thoughts on “From Diablo 3 to D&D: Treasure Pygmies”