Progress on the current Open Design project has been outstanding; 2/3 of the OGL design is complete and in playtesting, with the remainder due to hit playtest in the next week or two. We’re on track for a late June or early July release of the 3rd Edition version, and we’ll be starting the re-design for the 4E version in just a couple of weeks. So it’s a great time to sign up as a patron of Halls of the Mountain King, either to get in on the playtest cycle for 3E or to see the direction that the 4E version takes.

And to convince you that it will be not just a great-playing but also a great-looking adventure, here’s the cover design for the 3rd Edition version. It captures the feeling that I wanted for the Halls, dark and abandoned and dangerous.

Sneak peek of the Iron Gazetteer cover behind the jump. That’s the sourcebook that every patron gets in addition to the adventure, and that will also be available to the public. [More…] 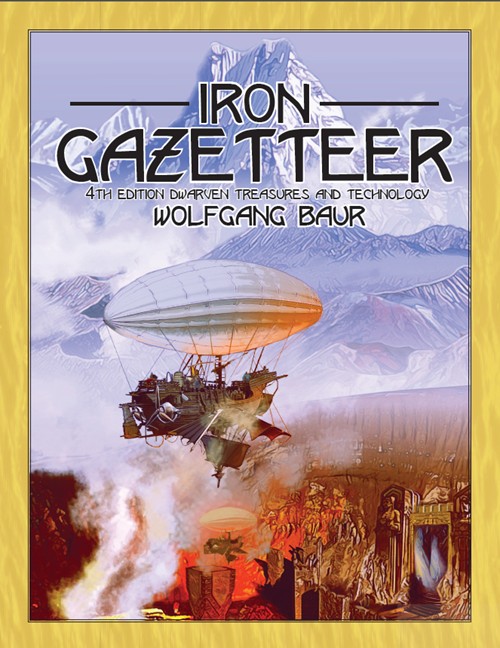 While the Halls adventure is a limited-edition (for the patrons who sign up now), the 4E Iron Gazetteer and the 3E Dwarves of the Ironcrag Gazetteer will be available to the public. Both are full of dwarven lore, rune magic, equipment, magical items, tools of corruption, and so on. The 3E version leans more toward culture, sagas, prestige classes, spells, and the history of the Ironcrags. The 4E version has more new monsters, dwarven paragon paths, and secret rituals. Not sure how much overlap we’ll see, actually, but some.

What are you waiting for? Sign up today for the 3rd Edition/OGL or the 4th Edition adventure, before the limited edition closes out.

The artist for both pieces is Malcolm McClinton, whose work was recently selected for inclusion in Spectrum 16. We hope to see more from him.