Skip to content
Home / Delve into the Depths in the Kobold Blog / Behind the Spells: Entangle

Welcome back to Behind the Spells, the series that provides a historical background, secret effects, and related material to classic spells of the world’s most famous fantasy roleplaying game. The rules (presented after the “Spell Secret” header) are compatible with any 3.5/OGL fantasy game, and the background weaves the spell into the lore of the game’s previous three editions. Each Behind the Spells release is narrated by an ancient gold dragon named Maxolt Alberiim. 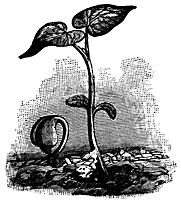 Creator
Thedrick Reagen, first-born son of Meventia’s most prosperous trading family, had what is probably the briefest stint ever in the druidic order. Brash and antagonistic, Thedrick was well known as a troublemaker even at the tender age of 10. His father saw that the youth was headed for disaster if his wild streak was left unchecked. After some thought, Thedrick’s father sent him to Oriodd, a human druid who could give the youth mental discipline and structure in his life.

As a druid in good standing with his own grove near Meventia, Oriodd would normally not have considered taking on wealthy hell-raiser. However, Thedrick’s father saved the druid’s life from bandits years before, so Oriodd repaid the debt by taking the youth on as an aspirant for one year. Thedrick was no stranger to magic—having even once wielded a wand during a crisis—so the opportunity to study magic was a welcome one to the youth.

Unfortunately, Thedrick was unaware of the exact purview of druidic magic and scoffed when the older man revealed that he would tutor the young man in patience, meditation, and nature magic. The two were bound to clash. [More…]

Thedrick’s Instruction as a Druid

Oriodd’s self-composure was tested daily by Thedrick’s thick-headed resistance to instruction. After a few weeks of intense training, Thedrick could calm his mind enough to cast a simple spell of magical detection. After he had mastered that, Oriodd said, he would learn a second spell.

Thedrick applied himself, indeed, Thedrick was eager to develop what Oriodd referred to as an “innate ability for spellcraft.” However, when the druid nam the spells he might teach next, Thedrick scoffed. “Purify this and detect that,” the youth lamented, “Don’t druids have spells for combat?” Since this was a time before shillelagh, Oriodd’s answer was a firm negative, at least for spells an aspirant could handle.

The Raiders
Before the two argue yet again about druidic shortcomings, the clatter sounds of metal echoed in the grove. Meventia’s militia was clashing once again with gnoll raiders, and the fight spilled into the small forest containing Oriodd’s grove. Seeking to defend the forest, Oriodd ran toward the combat with Thedrick in tow. The youth had seen this situation before, when Oriodd had only used his spells for defense, quenching fires from dropped torches and call down lightning bolts next to combatants to scare them away. That first instance involved a handful of intruders. This time, as the two reached the forest’s edge, they saw that the melee involved at least 30 creatures, many well within the tree line.

Oriodd motioned for Thedrick to keep back as the elder druid began his defensive spells, but Thedrick was not about to sit on the sidelines again. He knew the druids had two advantages which could stop the fight. The first was mastery over the plants. The second was their order’s inherent mystery. Despite their bitter struggle, human and gnoll alike cast quick and nervous glances deeper into the forest — they feared and respected forest magic. This was the perfect time to test something Thedrick hoped to add to the druidic spell canon.

The youth reached out with his senses and connected his magic to the nearby plants. With a thought, Thedrick infused the flora with an aggressive impulse and clenched his hands into fists. Humans and gnolls cried out in alarm when vines, limbs, and even grass entwined their arms and legs. A few broke free but at least a dozen combatants were caught in nature’s grip. All combat stopped and Thedrick called out from behind a tree, “This fight ends now, or nature will forever clutch these beings to her bosom.”

Human sneered at gnoll and gnoll growled at human but the warriors outside the spell’s entanglement sheathed their weapons. Neither side could afford to lose capable fighters, much anger the mysterious forest guardians.

Thedrick released the plants from his hold, and the combatants cautiously moved away from the forest and each other. The danger had passed. Oriodd moved to his aspirant’s side with a stern expression. “That was impressive,” he admitted, “but you put these plants in danger. Your days as a druid are done. Return home and never disturb my grove again.”

The Beginning of Wisdom

Thedrick wanted to argue that the flora had already been in danger, but perhaps the lessons in patience had taught him some wisdom; he complied with the druid’s wish. This was the last in a long line of disputes and, while master and student was pleased to have spent time with the other, they knew it was bound to end badly.

But each did learn something from the other. Thedrick gained a deeper appreciation and knowledge of magic, while Oriodd learned that thinking in unorthodox ways might not always be wrong. Thedrick’s spell (and bluff) were undeniably effective and did not deepen the danger to the forest plants. The plants became their own guardians.

Thedrick had to be evicted from the grove; Oriodd could not risk having both of them stripped of their druidic trappings by the order when they heard what had happened. The elder human added Thedrick’s new spell to his teachings and shared it with aspirants and comrades from that day forward. Its obvious utility helped the spell survive the centuries. The short-lived aspirant’s spell is known today, of course, as entangle.

Only creatures are entangled by the entangle spell but why is this so? What keeps plants enchanted by this spell from entangling each other and creating a field of knotted foliage? Well, after a bit of research, savants learned that the spell compels plants to entangle anything other than non-sentient plants. With a bit of tweaking, a spellcaster can camouflage himself and possibly other creatures and thus be unaffected by the spell.

With a successful Spellcraft check (DC 16), you can alter your aura to appear as a normal plant for purposes of the entangle spell. For every additional creature you wish to cloak, add +1 to the Spellcraft DC. This can only be done while the spell is being cast. For the duration of the spell, successful use of this spell secret makes the affected creatures immune to your entangle spell.

Related Research
Entangle is a great combat spell when you’re in the woods or some other locale with stringy growth. Unfortunately, you’re somewhat at a loss underground or in the city (among many other places). With the new item detailed below, you can relax in the knowledge that entangle is with you wherever you go!

NEW MAGIC ITEM—Entangle Sphere
This small glass sphere contains a bit of dirt and a tiny sample from a plant (leaf or bark, for example). You can throw it up to 60 feet with no range penalties. The sphere explodes on impact with any solid surface, sending forth a wave of plant life out in a 40-foot radius. The gangly plants immediately begin to wrap themselves around creatures in the area of effect (as per entangle) for the next 5 minutes.

Behind the Spells: Entangle is the eighth in a series produced for KoboldQuarterly.com by Tricky Owlbear Publishing, Inc.