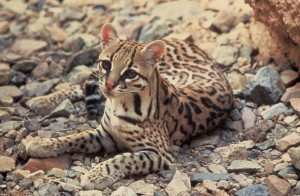 Poised on all fours, ready to strike, this gangly beast of matted fur and bony protrusions is barely as large as an ocelot. Nevertheless, the sheer savagery in its four slit-like eyes hints that it is more dangerous than its size suggests.

Few predators are as feared as the notorious gut tiger. Rather then shred its prey from the outside, it transports itself inside its prey and tears at its target’s innards. The few who have survived a gut jump describe it as a truly harrowing experience.

SPECIAL ABILITIES
Collapsible Body (Ex) Similar to a rat, a gut tiger can twist, bend, and even collapse its body’s bones with much more flexibility than its frame suggests. Although this allows a gut tiger to squeeze through spaces as though it were a Tiny-sized creature, the true purpose of this ability is to protect it from crushing damage when the gut tiger is inside the gullet of its prey. A gut tiger takes half damage from any bludgeoning damage it might take while being swallowed whole, as well as from all constriction and grappling attacks.

Gut Jump (Su) If a gut tiger is adjacent to its target, it may, as a standard action, magically transport itself inside its target’s largest internal cavity (usually the target’s stomach). The gut tiger is then treated as though swallowed whole, even if the target lacks the swallow whole special ability. From there, the gut tiger shreds its way back outside on successive rounds, eviscerating its target. Most creatures have an interior armor class of 10 + 1/2 its natural armor bonus with no modifiers for size, Dexterity, or protective magic. Once a gut tiger delivers 1/4 of its target’s hp with its bite or claw attacks, the gut tiger rends itself a hole and is ejected from its victim. As such, the gut tiger often require multiple jumps in order to kill its prey.

When a gut tiger attempts a gut jump, its victim may attempt to evade the attempt (Reflex DC 16; Charisma-based). If the save succeeds, the gut tiger materializes in a random vacant square adjacent to its target. A gut tiger under the effect of a dimensional anchor cannot use its gut jump. A gut tiger may only gut jump prey at least one size larger than itself (Medium or larger). Physical attacks targeting a gut tiger inside its prey deliver 80% of its damage to the prey and only 20% to the gut tiger.

Natives of the tropics, gut tigers migrate with their prey covering huge distances. While typically solitary, they also hunt in packs called aches, pursuing creatures as large as dire apes or even elephants. When gut tigers can find it though, their favorite meat, by far, is dinosaur flesh. The gut tiger’s growl is at a frequency higher than that which humans or dwarves can actually hear. As such, it appears to make a silent roar. Elves and halflings, however, report that the gut tiger’s growl is a maddening high-pitched screech.

Gut tigers enjoy sleeping inside the corpses of larger prey, often spending days at rest, nourishing itself on its victim from inside. Gut tigers abandon their young early after birth. Not immune to their own gut jumping ability, their Tiny pups pose an incredible threat to their safety. Family members often reunite after the young are full-grown. Gut tigers occasionally display an unexplained affinity for treants. Solid throughout, treants have little to fear from gut tigers; rather, the wooden creatures view them as energetic pets.

In the northern reaches, at least one local lord keeps a gut tiger in captivity, using the beast as a fearsome means of public execution. To the south, a few notorious taverns have dedicated a particularly horrendous drink to the creature: those who can boast that they have drunk a gut tiger and kept it down are respected indeed (Fortitude DC 16).