Skip to content
Home / Delve into the Depths in the Kobold Blog / From Diablo 3 to D&D: Traps with a Twist (Part 2) 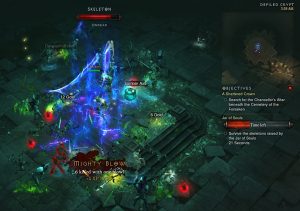 Take a look at the second part of a two-part article from Jerry that explores Diablo’s traps. This time Jerry tackles events that can work as larger traps.

Does a trap have to be a single-fire, whizz-bang affair? Certainly not. Diablo 3 does a pretty good job of emphasizing constant peril and the ever-present sense of danger. Another great example of a play on classic traps is the random dungeon event. The premise is simple: complete the event or pay the high price of certain death (or perhaps even worse for some characters). These events are basically a small series of rooms, or a single room that can show up in various places throughout the acts of the game. They are never guaranteed to show up, but when they do, they add a bit of excitement and also help add to randomness, unpredictability, and the ever-lingering sense of doom your game could carry.

Let’s use the jar of souls event as an example. Characters come across a large vacant room with a strange jar in the center. Tampering with the jar causes tons of skeletons (or whatever you want) to flood the room for a predetermined period of time. If the characters survive, they must then destroy the jar. Then they receive their rewards and move along. These events don’t have to be elaborate, but they should be evocative and exciting. Perhaps a series of hallways gives clues to the fact that a sleeping vampire lies in a nearby chamber. Players can follow through on this particular element or leave it. Other notable examples might be escaping a crumbling vault, helping a crazy man uncover treasure he claims to have lost just a few rooms away, or putting a lingering ghost to its final rest. 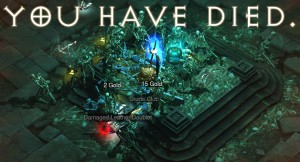 These events can provide reward to PCs or serve to distract PCs while their foes do something insidious (or just flee). What if the mischievous kobolds that dwell in an area came across the jar of souls first and plan to trigger it on unsuspecting adventurers from afar? Or if they plan to trigger it as they flee, thus creating a road block for PCs and adding time to form better escape plans or to rig more traps? It’s all a bit more dynamic and interesting than whirling blades and poison darts, yes?

Delve in My Pocket

The great part about these events, though, is that they are completely modular; you can insert them into any kind of playscape provided that you do some light narrative work and the locale is plausible. If you were to conjure up a handful of these and keep them in your back pocket to have ready, you could always be sure to spice up any delve if it begins to fall flat or if you want to ramp up the excitement for a bit. Think of them as you would any mini-adventure or side quest, but instead you’re dealing with a mini-delve.

They don’t have to tie back in to any of your major plot hooks and might even serve as good fodder for side quests and intrigue. They might also develop into plot arcs themselves. It all depends on where you and your players would take them. Here’s an example of a three-room drop-in side trek in any dungeon. I’ll leave the tricks, traps, and puzzles up to you.

Although the traps here might not be reinventing the wheel, their focus lies in choice and the dual sense of their lethality for both PCs and monsters alike. The dungeon events might not be a trap by some standards, but they do present a unique look at “surprise!” in your D&D game. I hope you’ve enjoyed this trap-centric set of blog posts and that it provides a bit of inspiration for you the next time you’re dreaming up certain doom for your PCs.

Speaking of certain doom, join me next week as we explore the ideas of massive boss battles and all of the fun that you can have by adding a dash (just a dash) of video game mojo into your tabletop crescendos!

Also, please toss me any feedback you might have about the series. Are there any topics or ideas you’d like to see me touch on? Let me know!