Skip to content
Home / Delve into the Depths in the Kobold Blog / Fistful of Lead: All the Monsters on a Budget 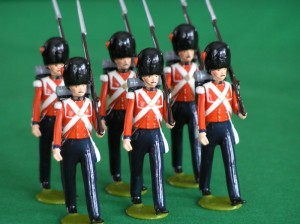 Some gamers prefer to play using miniatures, but cost can be prohibitive. Not even hardcore collectors have every miniature they need. Including multiples, it’s easy to buy 800 miniatures at a cost of thousands of dollars and still not own the exact minis for every occasion.

There is, however, a way to own almost every miniature you’ll need for several years of play, and all for a modest outlay of around $100. Your players will thank you…

Substitution is your friend

The first secret of doing miniatures on the cheap is that from a distance, humans and elves look a lot alike. An unpainted orc will pass as an unpainted human bandit, town guard, bugbear, or tiefling cultist. A giant can stand in for an ogre as easily as a troll.

In other words, you don’t need to own one of everything, only close-enough substitutes. Miniatures can be repainted, redecorated, or left unpainted where necessary. To begin, then, a good base of general, broadly applicable miniatures is essential.

55 Assorted Humanoids Although cheap generic minis are notoriously hard to find, wargaming manufacturer Caesar Miniatures sells a line of basic fantasy miniatures that covers all the basics. A set of 19 adventurers plus a set of 35 orcs or dwarves will cover you for a surprising amount of creatures.
Used for—PCs, NPCs, all humanoids, humanoid-form outsiders, lycanthropes, and some humanoid undead
Available from—Michigan Toy Soldier Co. (US), Hannants (UK and Europe)
Price—$23.98 / £9.76

100 Dogs Twilight Creations produces a board game called Zombies!!!. The game has an expansion called Zombies!!! bag o’ Dogs!!!, which is literally just a bag of a hundred feral dog miniatures.
Used for—Dogs, rats, animal familiars, animal companion, any small or medium animal or quadruped
Available from—Warehouse 23 (US), Maddison Games (UK), but at time of writing both suppliers are out of stock.
Price—$10 / £7.50

5 Demons/Devils Fiends are sufficiently monstrous to warrant their own minis. A careful selection might include two green slaad, two shadow demons, and a Pathfinder horned demon. You can omit these if you’re on a budget, but a change from painted army men is worth a small investment.
Used for—Demons, devils, fiends, slaad, trolls, incorporeal undead, minotaurs, gray renders.
Available from—Paizo.com, any D&D Miniatures singles supplier
Price—$32.95 / £28

1 Huge Dragon Although most monsters can take substitutes, dragons should not be neglected. Own at least one dragon miniature of Huge size, which can be repainted as necessary. A kid’s toy of a dragon can work surprisingly well, but something like Paizo’s black dragon looks much more authentic. Figures sold as toys are a reasonable budget option for larger minis, as even an inexpensive 4-inch dragon model equates to D&D’s expensive Gargantuan size class.
Used for—Dragons, almost exclusively
Available from—Paizo.com
Price—$14.95 / £12

Miscellaneous Of the creatures not covered by this selection, it helps to get creative. Empty dice boxes are popular as gelatinous cubes that can “engulf” other minis, and small vines or plants can serve as treants or other plant creatures. Use rocks as earth elementals. Keep an eye out for inexpensive toys or other items that can serve as D&D miniatures. Buy or make a few extra mini bases to attach these to. As a last resort, paper miniatures will work for any monster you can find a picture of: simply print it out, fold it over, and attach it to a spare base.

If this still sounds expensive, see if your gaming group can go in on you with this. Split between five players, a group can have a functionally complete miniatures set for only $23.65 or £14.87 each—less than the price of a class splatbook.

Where to find cheap miniatures

German company Revell produces the Epixx Fantasy line of figurines, which includes some rather excellent looking dragons. At around 4 inches high on average, these make for fine Gargantuan D&D creatures, and they’re surprisingly well-painted. The only drawback is that with the exception of dragons, the figurines may be too large for D&D scale.

Lego produces a range of fantasy mediaeval men, including knights, horses, orcs, siege weaponry, dwarves, and skeletons. If you don’t mind using Lego in your D&D game, this may be an option.

Old board games such as Battle Masters are full of cheap unpainted minis. If you can find a copy on Ebay, a full set contains over a 100 minis, including infantry, cavalry, archers, orcs, goblins, beastmen, an ogre, and a cannon.

Stikfas figures stand around 3 inches, so they fit naturally as Huge giants such as titans. They’re available for about $5 each from the Stikfas website, and elsewhere.

Official D&D minis are reliable but expensive. They’re perfect for when you absolutely need a particular monster, but using these exclusively is impossible on a budget. Likewise, Warhammer minis cover the fantasy staples very well but are expensive. You can find both them on Paizo’s online minis store.

Player: I get into flanking position with the bottle cap.
GM: Sure. The potted plant takes its attack of opportunity.
Player: Whuh?
GM: It has reach.
Player: Harsh.

Drop us a comment. We use them for minis in our koboldy games.

26 thoughts on “Fistful of Lead: All the Monsters on a Budget”