Skip to content
Home / Delve into the Depths in the Kobold Blog / Monsters of the Greek Heroic AGE: Chimera 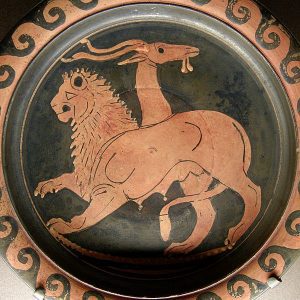 The Chimera is the offspring of Typhon and Echidna: the father and mother of monsters. It has the head and body of a giant lioness, the wings of a dragon, a goat’s head that extends from its back, and a serpentine tail that ends with a snake’s head. The Chimera breathes fire and often lairs in areas where explosive swamp gas is prevalent.

In the initial rounds of combat, the Chimera often makes fly-by attacks. If a successful Threaten stunt is made against it, or if it drops one of its opponents below 0 health, it will land and continue the rest of combat on the ground, making Triple Attacks when possible.

Triple Attack: While on the ground, the Chimera can make an attack with Lion Bite, Goat Head Butt, and Snake Bite as a single major action against one target for each attack. Make a single attack roll and compare the result vs. the Defense of each target.

Fly-By Attack: While flying, the Chimera can move its speed, make an attack and then move again as a single major action as long as all movement is flying.

Fire Breath:  As a 5 SP stunt, the Chimera can breathe fire on all creatures within 6 yards causing 3d6 + 3 penetrating damage. Creatures within the blast may make a TN 11 Dexterity (Acrobatics) test to take half damage. It is a blast effect with the Chimera at the center.

Tough Hide: The Chimera has a toughened hide that gives it an Armor Rating of 3.