Skip to content
Home / Delve into the Depths in the Kobold Blog / Drama vs. Realism vs. Game: Scenes 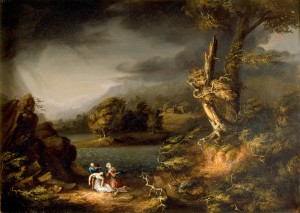 The heroes are in the middle of a political campaign, trying to win the support of the populace for their next effort. A key constituency is the kobolds of the Kobold Ghetto, and the players have decided to gain its favor by showing the kobolds that they have a lot in common. They decide to help out in the mines, buy drinks for kobolds at the local taverns, hand out coins, and generally do a lot of little things that add up to the support of the kobolds.

In a realistic scenario, the heroes would spend a lot of time doing hard work—10-hour days in silver mines, for at least a few weeks, which is long enough for the heroes to earn the respect of the kobolds. Realistically, a lot of it’s going to be boring. The heroes might get a pulled muscle or a stubbed toe, but not much else.

How can we make this dramatic? The rules of writing fiction suggest the use of scenes to make the game more exciting. A scene, simply put, is one group of characters at one location at one time, where someone wants something and there is an obstacle to them achieving that.

Let’s break down this task that the players are trying to accomplish into scenes. In scene 1, heroes are at a mine, trying to prove they have the chops. But our heroes are not miners, so they are learning. Perhaps the boss kobold is a bit of a bully, and he keeps throwing obstacles into the path of the heroes, such as “forgetting” to provide them with lanterns, assigning them to a dangerous area, and requiring that they collect a quota of ore before time runs out.

In scene 2 (which happens hours or days later), they are handing out coins in a poor part of town. What could the obstacle be? Perhaps they make themselves a mark for the local street urchins, who notice the heroes have far more money than they deserve, especially if they’re just giving it away. But the catch is this: If the heroes kill or injure the street urchin, that’ll undo all the goodwill they’re trying to collect. How do they save face while keeping control of the situation?

In scene 3 (again, which could happen at any time, not necessarily immediately thereafter), the heroes are trying to earn goodwill by buying kobolds drinks at a bar. What complications could get in the way? Perhaps the heroes are tested by participating in kobold drinking games or drinking kobold moonshine. Maybe a bar fight breaks out. Or perhaps the (human) guard stops by to arrest some kobolds, who look to the heroes to defend them.

There are endless ways that a long, ongoing challenge can be broken up into smaller scenes, each one suggesting that it is part of an ongoing story. The trick is to take out the boring parts and show only the interesting ones.

Some games use scenes quite effectively—in fact, they are built into the mechanics of a game. In such games (like Hillfolk, Fiasco, and Kingdom), the players take turns setting a scene, saying where they are and who’s in the scene. When it’s your turn to set a scene, you declare who the “active” player is (the one who wants something) and what their goal is. Then, once it becomes clear whether the active player will either achieve their goal or not, the scene is over—it doesn’t drag on a moment longer than it needs to.

Some storytellers have difficulty with this sort of approach, however, and most game systems do not have scenes built in. Additionally, some groups like to keep track of all the incidental expenses, like how much coin is spent at the bar, or for dinner, or for a night’s accommodation. So, skipping ahead may, to some groups, feel like a free lunch. A few game systems have a “lifestyle” mechanic—because your character is rich or poor, when they get to town they have access to a certain lifestyle (which includes a certain quality of accommodations, food, entertainment, and clothing). The lifestyle typically includes a monthly upkeep cost. Other game systems include a “resources” mechanic—you have a certain level of wealth, and any purchase that costs significantly less than your resources is incidental. Only significant purchases affect your resources. In either case, day-to-day expenses need not be tracked.

Downtime is another area of gaming that causes difficulty. If you skip ahead to a scene a few days later, a player might say, “But I wanted to do this other thing before we got here,” forcing either a stall in the action or an artificial-feeling “Okay, yes, you did that, now let’s move on.” It’s tempting for a storyteller to play things out day to day, just to make sure no one is skipped, and no backtracking is required: “Alright, the next day, do you want to do anything? No? Okay, nothing happens. Day after that, does anyone do anything unusual?” In this approach, players are given a chance to say they are doing something, and if they decline, the storyteller can say later that they had their chance. This situation most frequently arises when the players don’t know when the next event will occur—they are traveling down a tunnel and they don’t know how long it is (“You travel for an hour with no end in sight. Do you keep going?”) or are waiting for an army to attack (“You spend the day readying the fortress’s defenses and training the troops. Do you do anything unusual?”).

Perhaps a better approach is to establish what goes on in the downtime before it occurs, and then actually play out the scenes that are interesting. As a storyteller, you can tell the group: “You arrive back in town after your treasure haul, and you think it will probably take a few days to sell your goods, get your armour repaired, recover from wounds, and get the magical scroll translated. While you wait for those things to happen, what is your character going to be doing?” Once each character states their intentions, as a storyteller you can jump forward in the action to the next scene.

How do you handle scenes in your game? Do you have any special tips or tricks you’d like to share?

2 thoughts on “Drama vs. Realism vs. Game: Scenes”