Skip to content
Home / Delve into the Depths in the Kobold Blog / Book Review: Fire in the Blood by Erin Evans 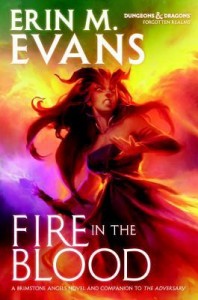 The Sundering is a world-changing event that is ushering in the newest edition of the iconic Dungeons & Dragons roleplaying game. The activities surrounding this move by Shar, goddess of loss and secrets (amongst other things), were captured in a book series aptly named The Sundering. One of those books was written by Erin Evans and featured her two iconic tiefling twins, their dragonborn adoptive father, and several love interests and some folks from the Nine Hells—you know just for flavor. Erin Evans has continued this tale with Fire in the Blood. This epic fantasy novel takes place mostly in the land of the Purple Dragon, the kingdom of Cormyr. The kingdom is at war with Sembia, who has allied itself with Shar and her forces of darkness. As is typical for the forest kingdom, internal political matters threaten to overshadow the external war that threatens to destroy the kingdom and give the forces of darkness the foothold they need.

Both of the twins are involved with love triangles that make the most jaded soap opera viewer salivate. These triangles actually involve more than three people because when the twins are involved, the other twin is always a factor, then adding in their dragonborn adopted father makes things more complicated. In one case, the future leadership of Cormyr is at stake, and in another a warlock’s powers and soul are at stake. To further complicate matters, the current heir to the throne has gone missing in a magical mishap and the son third in line for the throne has fallen into a magical coma resulting from the same accident that sent his father to places unknown. Agents of Shar have been discovered inside the walls of the capital of Cormyr, and trying to uncover their plots while not upsetting the delicate political balance is proving more dangerous than anyone could imagine. As if all of this wasn’t enough, trouble is brewing in the Nine Hells. Oh, and did I mention that gods once thought dead are rising again?

This book is epic fantasy. Normally I don’t expect this much intricate story from individual Forgotten Realms books, but Evans jumped in with both feet and showed zero fear when she did it. In past reviews, I have been in awe of Evans’s ability to balance the Machiavellian plots of the Nine Hells, and while those still rage in this story, her ability to bring those plots and schemes above ground to the Land of the Purple Dragon is one of many things that make her as successful as she is. Evans never seemed to lose control of all of the sub-plots that she balanced, and all of them combined with the very complicated relationships in this book. The combination of all of these could have quickly turned into a flaming wreck of a runaway train, but in Evans’s hands it felt more like watching freestyle skiing from a Go-Pro type camera. There are all of these twists and turns, and at times you think you are disoriented, until the actual skier hits their landing and you, as a voyeur, realize that you were safe the entire time.

Had I gone into this book realizing that it had an epic setup, I think I would have gotten into it quicker. As it was, I initially felt like Evans had drawn things out for a typical Realms novel (if such a thing exists). But, when I saw she went epic fantasy with this one, the seemingly drawn-out nature of the story made more sense and helped me to focus on clues that were being dropped. I started looking at long-term solutions to the problems at hand, rather than the whirlwind hack-and-slash action I was expecting. Reading Fire in the Blood felt like reading an installment of the Wheel of Time as opposed to a typical short one-off fantasy novel.

I would have preferred a bit more action and a little less drama, but that is to be expected when you have relationship networks as complex as the ones Evans establishes in this book. These relationships felt real. There were plenty of times where I felt like strangling several people involved in those relationships, because of the bad choices they made or their almost adolescent and skewed views of their love interests and rivals. Evans also included a LBGT aspect in the book, and it wasn’t overwrought.

Evans is a great writer, and she has established some outstanding characters. This foray into the epic side of fantasy is a success, but I worry that she will fall prey to her characters becoming iconic and being slaves to their iconic status. She needs to make sure she mixes things up, and she needs to ensure that her characters are more than just the glaives that they wield or the wand that was given to them by a lover. The characters are more than that, but there is a chance that the twins will be stuck in the same rut that a very popular dark elf and his companions have fallen into—and that would cheapen the beautiful thing that Evans has built.