Skip to content
Home / Delve into the Depths in the Kobold Blog / Trapsmith: Faneway of Air 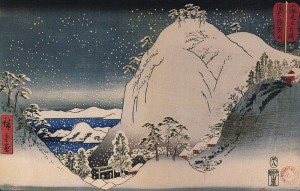 “A man of conviction and piety will walk the fanes at least once in his life. To walk the fanes is to tread in the footsteps of the saints; it is a test of faith. A test where the righteous are rewarded and the false are punished.”

The Faneway of Air straddles the highest mountain of the realm, spiralling upward toward the peak. Each part of the faneway presents a test of faith for a cleric sharing the faneway’s domain. To others, it presents deadly peril.

A 10-ft.-tall statue of a woman stands in the middle of a 30-ft.-wide passageway. Four large pillars surround the statue, casting long shadows over it. The distance from each pillar to the statue is 15 ft. Strong winds blow through the passageway…

Knowledge (religion) (DC 13)—The statue represents the Queen of Air and Darkness.

If the statue perceives anything passing the pillars, it unleashes a crackling blast of electricity that affects all creatures between the statues and the pillars.

Standing next to a pillar and casting obscuring mist is a way to bypass the trap’s visual trigger: the strong winds dissipate the mist in one round.

The path you have been following widens to almost 20 ft. before ending abruptly: a 15-ft.-wide section of the path has dropped away. The mountain wall is wet, slippery, and quite treacherous.

Using the wall to cross the chasm requires a Climb check (DC 30). Jumping across the 15-ft.-wide chasm would normally be a relatively easy Jump check (DC 15), but a magical trap activates as soon as a creature makes the jump. The trap unleashes severe winds that double the Jump check DC to 30. Failure to make the check results in a fall down the chasm.

A dozen 20-ft.-tall iron statues surround a small pyramid of sorts. The top of the pyramid can be reached by ascending seven steps.

Succeeding on a Knowledge (religion) (DC 15) check reveals that every deity with dominion over the Air domain is represented by one of the statues.

Boon of the Chosen (Sp) You have walked the Faneway of Air and survived the ordeal. By spending three uses of your lighting arc ability as a standard action, you unleash a powerful blast of lighting targeting any foe within 60 ft. as a ranged touch attack. This blast of lighting deals 2d10+20 electricity damage.